"O righteous God, who searches minds and hearts, bring to an end the violence of the wicked and make the righteous secure." (Psalm 7:9) 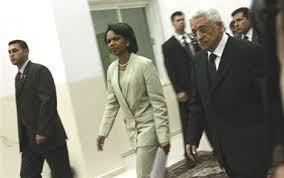 US Secretary of State Condoleezza Rice came to Israel on Thursday, patted Prime Minister Ehud Olmert on the back, and left a few hours later without leaving much of a footprint. The secretary of state also praised Israel for its "statement of restraint" concerning the cease-fire, "because it is of course quite fragile, but we would like to see it consolidated and then extended." Calling Palestinian Authority Chairman Mahmoud Abbas "a man who has been committed to a peaceful resolution of the Palestinian-Israeli conflict and the establishment of two states - democratic and independent - living side-by-side in freedom," Rice also said this "has been a week of progress, a week that we hope can be consolidated. The cease-fire now needs to be consolidated by action to make certain that it is enforced."

Media sources reported Friday that following their meeting yesterday in Jerusalem, US Secretary of State Condoleezza Rice praised Israeli Prime Minister Ehud Olmert for his policy speech delivered on Monday and his new plan to resume negotiations with the Palestinians. In addition, Rice also lauded the current Gaza ceasefire, as well as Israel's restraint in not responding to the 14 Kassam missiles fired from Gaza into Israel since the implementation of the truce.

Palestinian Authority Chairman Mahmoud Abbas is expected to make a "dramatic announcement" this weekend regarding the ongoing crisis with Hamas over the formation of a Palestinian unity government.

Despite the ceasefire between Palestinian terror factions and Israel agreed to last Sunday, the Israeli media reported Friday that not only had two more Kassam rockets landed in Israel's western Negev, but that weapons smuggling into the Gaza Strip is still continuing at a breakneck pace, just as the security establishment had warned. In total, 14 Palestinian- launched Kassam missiles have been fired into Israel since Sunday's truce agreement.

Hunkering down behind police barricades and heavily armed soldiers, Lebanon's government braced on Friday for the first day of massive protests by the Hizb'Allah-led opposition aimed at toppling Prime Minister Fouad Saniora and his ruling coalition of anti- Syrian allies.

Posted by Capitol Hill Prayer Partners at 2:33 AM