• We must pray for honesty, integrity and His blessings upon all American and Iraqi dealings! May God be glorified in these two countries and also in their allies' nations! • "But in a great house there are not only vessels of gold and silver, but also of wood and clay, some for honor and some for dishonor. Therefore if anyone cleanses himself from the latter, he will be a vessel for honor, sanctified and useful for the Master, prepared for every good work." (II Timothy 2: 21-22 NKJV)

The Navy and Air Force met their recruiting goals last month while the Army and Marine Corps exceeded theirs, the Defense Department announced. The Army, which is bearing the brunt of the work in Iraq, did the best. It signed up 6,485 new recruits in November compared with its target of 6,150 – meaning 105 percent of its goal. All the services turned in similar performances in October as well, meaning they so far are meeting their goals for the 2007 budget year that began Oct. 1.

• Praise God that even though anti-war protestors are backed by the media to help decrease support for our military and the Iraqi war, He has seen fit to champion our nation, increase our military, and continue the birthing of democracy in a dictatorship country! May we faithfully continue to pray for the protection of our nation and troops; and may we as Americans, continue to honor God! • "Unless the Lord builds the house, they labor in vain who build it; unless the Lord guards the city, the watchman stays awake in vain." (Psalm 127: 1 NKJV)

One of the world's largest meat processors shut down nearly all of its U.S. operations Tuesday as federal agents raided plants in six states in a crackdown on illegal immigrants who allegedly used stolen identification to get their jobs. The Swift probe, which began in February, uncovered a "massive identity fraud scheme" in which illegal workers had "stolen the identity of hundreds of people," ICE Assistant Secretary Julie Myers said.

• Shame on an American company that could harm its government by employing illegal workers with stolen identities to benefit their operations! Dear Lord, we pray that this company and any others who exercise the same employment practices would be convicted of their wrongdoing, repent of their sin and make amends to help identify illegal workers who may jeopardize our nation's security! Thank You for uncovering this deception! • "Can you search out the deep things of God? Can you find out the limits of the Almighty? They are higher than heaven--what can you do? Deeper than Sheol--what can you know? Their measure is longer than the earth and broader than the sea. If He passes by, imprisons and gathers to judgment, then who can hinder Him? For He knows deceitful men; He sees wickedness also. Will He not then consider it?" (Job 11: 7-11 NKJV) 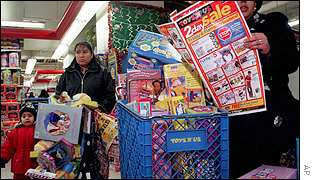 Consumers battered by a multitude of economic woes came roaring back in November, pushing retail sales up by the largest amount in four months.

• May America remember that the God of Abraham, Isaac and Jacob gives prosperity! Praise Him for our nation's economic boost! • "Let them shout for joy and be glad, who favor My righteous cause; and let them say continually, 'Let the Lord be magnified, who has pleasure in the prosperity of His servant.' And my tongue shall speak of Your righteousness and of Your praise all the day long." (Psalm 35: 27 NKJV) 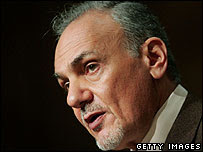 The Saudi Arabian ambassador to the US, Prince Turki al-Faisal, has abruptly resigned and left Washington after just 15 months in the job. Prince Turki's departure leaves a void in US-Saudi relations at a moment when the Middle East faces crises on several fronts.

• Dear Lord, we ask that Saudi Arabia not participate in any unknown circles of evil that could harm America, or Israel. May any negative covert activities and the spirit of dissension depart from our diplomatic relations with all Middle Eastern countries! • "Behold, how good and how pleasant it is for brethren to dwell together in unity! It is like the precious oil upon the head, running down on the beard, the beard of Aaron, running down on the edge of his garments. It is like the dew of Hermon, descending upon the mountains of Zion; for there the Lord commanded the blessing--Life evermore." (Psalm 133: 1-3 NKJV)

A U.N. office charged with promoting accountability has for years been steering millions of dollars in contributions from the Italian government toward projects that enrich Italian nationals but offer little of real value, according to former and current staff members. The contributions have been used to hire unneeded consultants and establish international programs, often in Italy, say the staffers employed in the U.N. Department of Economic and Social Affairs (DESA). The U.S. Mission to the United Nations has asked the U.N. watchdog agency to investigate the awarding of contracts by DESA and reports of retaliation against staff members. It is also seeking to have documents seized before they can be destroyed, according to internal U.S. communications. Some sensitive financial data disappeared from the DESA Web site last week after a reporter began making inquiries.

• Woe to the United Nations for their internal corruption! God has been aware of these dishonest dealings since Moses, His servant, spoke of them and their resultant punishment thousands of years ago! • "They have corrupted themselves; they are not His children, because of their blemish: a perverse and crooked generation. Do you thus deal with the Lord, O foolish and unwise people? Is He not your Father, who bought you? Has He not made you and established you? And when the Lord saw it, He spurned them, because of the provocation of His sons and His daughters. And He said: 'I will hide My face from them, I will see what their end will be, for they are a perverse generation. Children in whom is no faith.' " (Deuteronomy 32: 5-6, 19-20 NKJV)

Space weather forecasters revised their predictions for storminess Wednesday after a major flare erupted on the Sun overnight, threatening damage to communication systems and power grids while offering up the wonder of the Northern Lights.

• Continue in intercession as this geomagnetic storm begins to hit our planet. Ask for God's hand of mercy to be upon us, deflecting the path of this storm at the last minute so as to minimize any damage. • "We are not offering our prayers to You because of our righteousness, but because of Your great mercies." (Daniel 9:18) 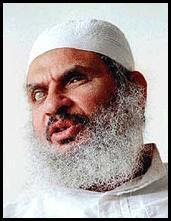 The FBI has sent a bulletin to state and local law enforcement warning of possible reprisals as the health of Sheik Omar Abdel-Rahman failed. The mastermind of the first World Trade Center bombing has called for revenge should he die in U.S. custody. FOX News has learned that the FBI sent the bulletin under an "abundance of caution." • Pray for all of our law enforcement personnel in this hour, that they be especially and unusually alert to any "signals" among our citizens that would point to a terrorist attack. Pray for the safety of all of us in our nation. Decree PSALM 91 in its entirety, in response to this alert.
Posted by Capitol Hill Prayer Partners at 11:46 PM