The White House said yesterday that President Bush will not lay out his plan to chart a new course in Iraq until early next year, as new polls showed Americans are more pessimistic than ever about the nation's ability to win the early four-year war.

• Offer praise to the Lord for the strength of our President -- a man who does not react to reports, but rather one who takes his time to study issues through carefully, then responding to what he sees. Continue in prayer for wisdom for President Bush as he seeks to know the will and the heart of God for Iraq, and for our national policy for the Iraqis, in the days ahead. • "Have I not commanded you? Be strong and courageous. Do not be terrified; do not be discouraged, for the LORD your God will be with you wherever you go." (Joshua 1:9)

Dubai Ports World, the company whose planned takeover of major U.S. port operations ignited a political firestorm earlier this year, has agreed to sell those operations to AIG Global Investment Group. The company announced the deal today. The U.S. operations at six major U.S. seaports in New York and New Jersey, Philadelphia, Baltimore, Miami, Tampa and New Orleans were valued at approximately $700 million, but DP World did not disclose the sales price. The deal also involves stevedoring operations in 16 locations along the eastern seaboard and Gulf Coast and a passenger terminal in New York City.

• Let's send a resounding chorus of praise to the Lord for this excellent resolution of foreign interests involved in our ports! • "Praise Him for His mighty acts; Praise Him according to His excellent greatness!" (Psalm 150:2)

President George Bush has declared a state of emergency in New York and Washington State following severe storms and flooding.

• Lord, let Your mercy and grace cover the land and people of New York and Washington. • "And we know that all things work together for good to those who love God, to those who are called according to His purpose." (Romans 8:28)

The Pentagon's inspector general is looking into a promotional video that shows generals in uniform endorsing a Christian group that caters to political and military leaders, a spokesman said. A watchdog group asked for a formal investigation into circumstances surrounding the video promoting the Christian Embassy, saying the role played by seven army and air force general violated military regulations. "High level army and air force officials appearing in uniform, in the Pentagon touting the Christian embassy implies a government endorsement of the organization and its sectarian religious mission," the Military Religious Freedom Foundation wrote in demanding the investigation.

[Editorial Comment: Capitol Hill Prayer Partners has the highest respect for the Christian Embassy, and the quiet work they carry out here in Washington, D.C. This organization ministers to members of Congress, ambassadors, presidential appointees and Pentagon officials, and has been caring for, encouraging and equipping our country's leaders and decision-makers for nearly 30 years.]

• Lord we ask that You cut down decisions in our government that destroy our freedom to follow You. We ask for strength and boldness to those who have been told to be silent. • "Blessed are those who are persecuted for righteousness' sake, for theirs is the kingdom of heaven." (Matthew 5:10)

Iranian President Mahmoud Ahmadinejad's conference questioning the Holocaust came to an end Tuesday, but not before hearing former KKK Imperial Wizard David Duke say that gas chambers were not used to kill Jews. 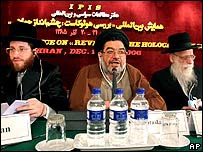 Iranian President Mahmoud Ahmadinejad has told a conference in Tehran questioning the Holocaust that Israel's days are numbered.

• We rejoice, Lord, that Your covenant with Israel will not allow the enemies of Your people to prevail. • "It shall be in that day that I will seek to destroy all the nations that come against Jerusalem." (Zechariah 12:9) 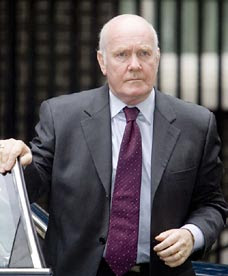 An attempted terrorist attack in Britain over the Christmas period is "highly likely", the Home Secretary said late last week. John Reid said that around 30 conspiracies were under preparation, and the current threat level was "very high indeed". He told GMTV Sunday that he did not think it an attack was inevitable, but that "the terrorists only have to get through once, as they did on July 7, for us to see the terrible carnage that it causes. Our security services have to be successful on every occasion to prevent that happening," he said.

• Lord we take authority over all plans of the enemy towards both England and the United States. We ask that security forces be granted wisdom and knowledge from You. We apply the Blood of Jesus over both nations from coast to coast, and declare that "no weapon formed against them shall prosper!" (Isaiah 54:17)

South Dakota Democratic Sen. Tim Johnson was admitted Wednesday to George Washington University hospital in Washington, D.C., after becoming disoriented Wednesday. Johnson spokeswoman Julianne Fisher said Johnson was taken to the hospital around noon after walking to his Capitol office following the conference call. The Capitol physician came to his office and examined him, and it decided he needed to go to the hospital. "It was caught very early," she said.

• With a Democratic Senator from the State of South Dakota, and a Republican Governor who must name his replacement were he to become disabled, this town is already humming with political "power play" rumors. Stand in repentance for the shark-like political atmosphere that permeates our nation's capital, and pray for healing for Senator Johnson. Lift up the medical staff at GWU Hospital, asking that they be granted wisdom for him in this hour; and lift up his family, asking our Lord to comfort them and to bring them His peace. If the political landscape DOES change in the Senate, this is in the hand of God. • "By His stripes, ye are healed." (Is. 53:5) "Thy Kingdom come, Thy will be done on earth, as it is in heaven." (Matt. 6:10)

• This solar flare is a true act of God. Although this will not endanger lives directly, disruption of radio and satellite communication, as well as the loss of power grids, is possible. It is time to repent before a holy God, and to ask for His mercy upon our planet. • "Truly, these times of ignorance God overlooked, but now commands all men everywhere to repent, because He has appointed a day on which He will judge the world in righteousness by the Man whom He has ordained. He has given assurance of this to all by raising Him from the dead.” (Acts 17:30,31)