The European Union on Wednesday called on Israel to clarify remarks made by Prime Minister Ehud Olmert earlier this week that indicated a shift in Israel's policy of nuclear ambiguity. 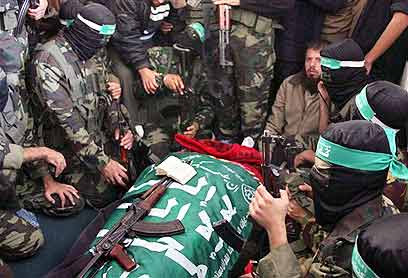 Two Hamas activists were injured Wednesday after a grenade was hurled by a Fatah member at a rally held by Hamas in the Nuseirat refugee camp in Gaza. Hamas security officers managed to subdue the attacker.

Wednesday morning, anonymous gunmen shot and killed a judge in Khan Younis, in southern Gaza. Palestinian sources reported that the four gunmen got out of a civilian vehicle and opened fire at Judge Bassem el-Fara, who was killed on the spot. This is the second murder of a Palestinian judge this week: Three days prior, Judge Jamal Abu Salim was killed in the same area.

Construction of the West Bank security barrier will be completed by the end of 2008, a senior defense official involved in the project told The Jerusalem Post on Wednesday.

A gathering of Holocaust deniers in Iran touched off a firestorm of indignation yesterday across Europe, where many countries have made it a crime to publicly disavow the Nazis' systematic extermination of 6 million Jews.
Posted by Capitol Hill Prayer Partners at 11:43 PM