The White House Conference Center and buildings surrounding Blair House were evacuated Monday after a K-9 unit made a "hit" on a car parked in front of Lafayette Park, across from the White House. Members of the press who were standing outside of the executive mansion were also asked to leave the White House grounds, though staff and President Bush are in the building ahead of a celebration with NCAA winning teams. [The press corps has been working out of the conference center at Jackson Place and H Street, N.W., while its usual space inside the White House is under renovation.]

U.S. officials said D.C. Metro Police were using an abundance of caution in calling in an explosives and ordnance team after what is reportedly a bomb scare. The police dog apparently homed in on a gray minivan outside the press corps quarters.

Israeli Prime Minister Ehud Olmert had just arrived in Washington, D.C., for a stay at Blair House, where foreign dignitaries often reside while visiting the president. Ehud is in town for talks with U.S. officials on the recent dissolution of the Palestinian government, and security has been heightened because of his visit. His vehicle motorcade remained outside Blair House while the evacuation occurred.

· Pray for the absolute safety of all involved in the White House - especially the president and our Israeli visitors. P. M. Olmert will meet with President Bush at 9:30 a.m. on Tuesday, June 19, for discussions, possibly about giving away the Golan Heights for peace. Praise the Lord for a police dog trained to sniff out explosives and for all techniques for protection. And intercede for the discussions at the White House. · "The Lord is my Rock, and my fortress, and my deliverer: my God, my strength, in whom I will trust: my buckler, and the horn of my salvation, and my high tower." (Psalm 18:2) 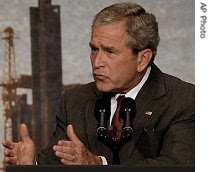 .. President Bush speaks to the Associated Builders and Contractors meeting in Washington

President Bush warned Congress on Saturday that he will use his veto power to stop runaway government spending. "The American people do not want to return to the days of tax-and-spend policies," Bush said in his radio address. The House passed a $37 billion budget for the Homeland Security Department on Friday, but Republicans rallied enough votes to uphold a promised veto from Bush. "I am not alone in my opposition," Bush said, stressing that 147 Republicans in the House have pledged to stand with him. "These 147 members are more than the one- third needed to sustain my veto of any bills that spend too much."

A House agreement providing greater transparency on pork barrel spending is being hailed by a government watchdog group and GOP officials as a victory for taxpayers, while the Democratic appropriations chairman said that "the best thing about this agreement is that it allows us to proceed." 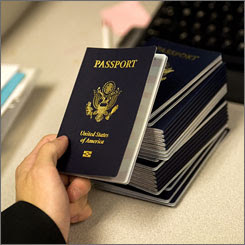 The Homeland Security Department is vigorously fighting a move by Congress to delay a requirement that U.S. citizens show a passport to re-enter the country by land or sea from Mexico, Canada, Bermuda or the Caribbean, saying it puts the nation's borders at risk. Security leaders say Congress is "tempting fate" by seeking the delay and are dead set against it, said Homeland Security spokesman Russ Knocke. "That is just simply not acceptable to us."

· Pray that this delay is removed in Congress, so that our national security can be enhanced at our borders. Pray! · "The effectual, fervent prayer of a righteous man availeth much." (James 5:16)

Variations of The Stryker Combat Vehicle

An Army vehicle controversial since it was conceived in the late 1990s is facing mounting scrutiny from military experts and a leading government watchdog amid a recent spike of American casualties in Iraq.

· Pray that our military in Iraq are protected by the Lord and their guardian angels. In addition, pray that any weaknesses in the Army vehicles will be revealed and corrected so that our military can be protected. If there are no weaknesses, pray for the death of the controversary. Spiritual armor as well as physical armor is needed. · " I will wait for You, O you his strength: for God is my defense." (Psalm 59:9) NKJV

Secretary of State Condoleezza Rice announced Monday that the United States is lifting its economic sanctions on the Palestinian Authority now that terror group Hamas has been booted from the government. The decision to release millions of dollars in aid follows the lead of the European Union. Both the United States and EU froze funding to the region after the January 2006 election gave the terrorist group Hamas, which has not renounced violence and calls for the destruction of Israel, a leading power-sharing agreement in the Palestinian government.

· Pray in the spirit over this report, and ask for mercy yet for our people. Compared to Hamas, Fatah, which rules the Palestinian Authority, is merely the lesser of two evils. A terrorist by any other name is still a terrorist, and the Charter of the PA, founded by Yasser Arafat, calls too for the destruction of the State of Israel -- perhaps only in more moderate terms. Pray for mercy. · "In the same way, the Spirit helps us in our weakness. We do not know what we ought to pray for, but the Spirit himself intercedes for us with groans that words cannot express. And he who searches our hearts knows the mind of the Spirit, because the Spirit intercedes for the saints in accordance with God's will." (Romans 8:26,27)

· Lord, man thinks one way, but You think another way about the concerns of men. We cannot force the people of the Middle East to work together in order to have peace. There is no political or military solution to any of this. There is no peace in our lives and in our nations unless we come to know and serve the Lord, Jesus Christ. We pray for the laborers as Jesus told us to pray! · And Jesus said to them, "I am the bread of life. He who comes to Me shall never hunger, and he who believes in Me shall never thirst. And this is the will of Him who sent Me, that everyone who sees the Son and believes in Him may have everlasting life; and I will raise him up at the last day." (John 6:35,40)

Posted by Capitol Hill Prayer Partners at 3:17 AM