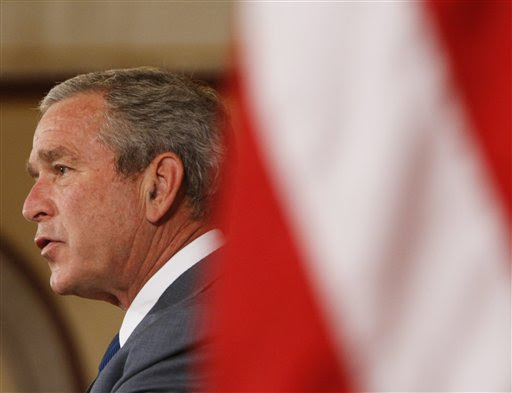 ..President Bush said the bill offered a "historic opportunity for Congress to act," and appeared optimistic about its passage by week's end.

· The Immigration Bill that is now being discussed and voted on in the Senate, even as we write this alert. Reports are that emotions are running very high tonight on the Senate floor. Pray for wisdom and guidance for all U.S. Senators as they decide the fate of millions of people's lives. Pray that the Lord would give wisdom to bring a balance of justice and mercy to this bill. Pray without ceasing . . . pray!

To see how YOUR senator voted today, go to this link:

After prayer, be sure to contact your own senator and let your voice be heard on this critical matter.

Those who knowingly convey false information with the intent to keep others from voting would face up to five years in prison under voter deception legislation that passed the House on Monday.

· Lord many of these bills are being passed to be used against conservatives. We pray that this bill will not be like the RICO law that was used against the Christian prolifers! We ask You to thwart those who would go against Christians!

· When the righteous are in authority, the people rejoice; But when a wicked man rules, the people groan. (Proverbs 29:2)

Chief U.S. negotiator Christopher Hill yesterday outlined an ambitious agenda for the rest of the year that includes talks on a permanent peace treaty and the birth of a multinational security organization for Northeast Asia.

· Lord we pray that the North Koreans are serious about dismantling their nuclear weapons program and that they will produce a full declaration of its nuclear programs, materials and facilities, including an effort to enrich uranium without any hassle or deception!

· But this is a people robbed and plundered; all of them are snared in holes, and they are hidden in prison houses; they are for prey, and no one delivers; for plunder, and no one says, "Restore!" (Isaiah 42:22)

First Lady Laura Bush started a four-nation Africa tour Monday that is expected to focus on how the U.S. can help fight AIDS on a continent where many countries struggle to even provide basic health care. Mrs. Bush, accompanied by her daughter Jenna, is scheduled to visit areas that have benefited from U.S. AIDS funding this week - the west African nations of Senegal and Mali, along with Mozambique and Zambia in southern Africa.

· Lord, we pray that our First Lady will be successful in getting other nations to get involved in this issue of AIDS. May many of God's laborers working in this area be able to reach multitudes!

· But He, being full of compassion, forgave their iniquity, And did not destroy them. Yes, many a time He turned His anger away, And did not stir up all His wrath; for He remembered that they were but flesh, A breath that passes away and does not come again. (Psalms 78:38,39) 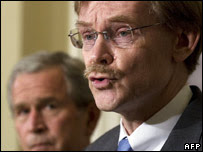 Robert B. Zoellick, a seasoned player in international financial and diplomatic circles, won the unanimous approval of the World Bank's board yesterday to become its next president. 'I am ready to get to work,' Zoellick said shortly after the board's action. Bush, in welcoming the board's action yesterday, called Zoellick 'a dynamic leader who is deeply committed to the mission of the World Bank.'

· With so many nations influenced by the World Bank's decisions, we pray for God's wisdom for Robert Zoellick as next President of the World Bank in its role of financial and technical assistance to developing countries around the world. We pray that nations will also become rich in spreading the gospel; also, in knowing and serving the Lord.

· By humility and the fear of the Lord are riches and honor and life. (Proverbs 22:4)

The story of a 6-year-old Afghan boy who says he thwarted an effort by Taliban militants to trick him into being a suicide bomber provoked tears and anger at a meeting of tribal leaders.

· Lord, we pray that the Taliban will not be able to continue their abominations by using little children as suicide bombers. Let there be freedom for Christian workers in Iraq to spread the gospel so they can truly be free!

· You shall therefore keep His statutes and His commandments which I command you today, that it may go well with you and with your children after you, and that you may prolong your days in the land which the Lord your God is giving you for all time." (Deuteronomy 4:40)
Posted by Capitol Hill Prayer Partners at 9:27 PM