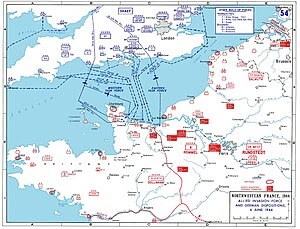 Battle plans for the Normandy Invasion, the most famous D-Day.


(Yesterday marked) the 63rd anniversary of the D-Day invasion to liberate Europe from Hitler's fascism. U.S. forces alone sustained over 6,500 casualties in one day. Knowing the gravity of the operation, Franklin Roosevelt, one of America's most liberal presidents, led the nation in a six minute prayer. Here are some excerpts:

"Almighty God: Our sons, pride of our nation, this day have set upon a mighty endeavor, a struggle to preserve our Republic, our religion, and our civilization, and to set free a suffering humanity.

"Some will never return. Embrace these, Father, and receive them, Thy heroic servants, into Thy kingdom.

"And for us at home -- fathers, mothers, children, wives, sisters, and brothers of brave men overseas, - help us, Almighty God, to rededicate ourselves in renewed faith in Thee in this hour of great sacrifice.

"Thy will be done, Almighty God. Amen."