Jerusalem's High Court of Justice Thursday gave men and women who have not only chosen to engage in unnatural sexual relationships, but insist on parading those relationships in public, permission to do so in the streets of the capita

The United Nations Human Rights Council was expected to adopt a reform package Thursday singling out Israel for special treatment as long as the Jewish nation keeps control over those parts of its biblical homeland coveted by the Arabs. 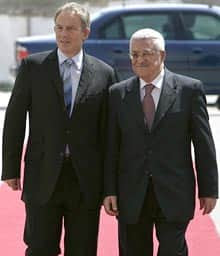 Intense worldwide media speculation Thursday had it that US President George W. Bush has asked British Prime Minister Tony Blair to take the post of special envoy to the Middle East - specifically focusing on the Israel-"Palestinian" conflict.

· Father we pray for Your Spirit to touch Mr. Blair and bring about a completely new outlook on the Middle East, fresh from Your heart. We ask Your wisdom and protection over him as he moves into a new chapter of his life. · "The Lord takes pleasure in those who fear Him, in those who hope in His mercy." (Psalm 147:11)

The United States will increase its military assistance to Israel and sign a new agreement securing American aid to the country for the next decade, President George W. Bush announced Tuesday following his meeting with Prime Minister Ehud Olmert.

· Lord, we rejoice that our nation has decided to increase military assistance to Israel. We ask that wisdom be given to our leaders to stop funding terrorism in that same region. May Your Presence be the guardian of Your people. · "No king is saved by the multitude of an army; a mighty man is not delivered by great strength."( Psalm 33:16)

Russia has begun to implement the contract signed by Rosoboronexport with Syria this year for the delivery of five MiG-31E fighter-interceptors. That means that Russia is renewing arms deliveries to the Middle East after a hiatus due to the war in Lebanon. Iran may be the big winner from the deal, since there exists an Iranian-Syrian mutual defense agreement, and Iran is financing Damascus's purchase.

· Father we again beseech You to cover Israel beneath Your wings of protection. We ask that You release Your Heavenly Host against the enemies of Your people. · . . . Do not fear, for those who are with us are more than those who are with them. And Elisha prayed, and said, Lord I pray, open his eyes that he may see. Then the Lord opened the eyes of the young man, and he saw. And behold, the mountain was full of horses and chariots of fire all around Elisha. (2 KIngs 6:16-17)
Posted by Capitol Hill Prayer Partners at 6:28 PM