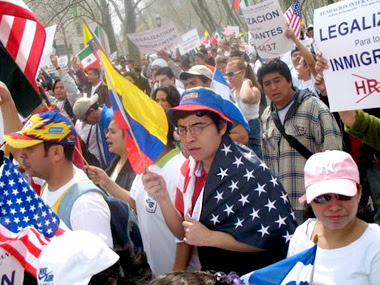 After a week at home with their constituents, the Senate architects of a delicate immigration compromise are increasingly convinced that they will hold together this week to pass an overhaul of the nation's immigration laws, with momentum building behind one unifying theme: Today's immigration system is too broken to go unaddressed.

· Lord, we pray for a great chorus of people in the nation to rise up to speak to our leaders about their feelings on immigration reform. Let no unjust laws be enacted. And let the borders be quickly secured. · I will give peace in the land, and you shall lie down, and none will make you afraid; I will rid the land of evil beasts, and the sword will not go through your land. (Leviticus 26:6)

The White House is developing a short list of possible Supreme Court nominees so President Bush can move swiftly if a justice retires at the end of June, when the Court breaks for its summer recess, according to sources involved in the selection process.

· Pray that only whoever is appointed to the Supreme Court will have the wisdom from God to pass righteous judgments! · I have heard of you, that the Spirit of God is in you, and that light and understanding and excellent wisdom are found in you. (Daniel 5:14)

President Bush has asked Congress to approve $30 billion over the next five years to mount a more aggressive campaign against the spread of AIDS worldwide.

· Father we ask Your mercy for those afflicted with HIV/AIDS worldwide. We pray that in this effort to assist people, You be lifted above any plans of men. May Your healing and miracle power be displayed for all to see, and may Your truths be used as guidance for all legislation. · "Open your mouth, judge righteously, and plead the cause of the poor and needy." (Proverbs 31:9)

The three Democratic presidential front-runners last night took turns jabbing one another and President Bush, with Sen. Hillary Rodham Clinton blaming the Iraq war on the president and a tense exchange between Sen. Barack Obama and former Sen. John Edwards.

· Lord, we pray for a Christian leader to be elected as our next President who is obedient to You and will do Your will. Raise him up as leader as You did to David. And let Your choice be clear to the nation. · I know that whatever God does, It shall be forever. Nothing can be added to it, And nothing taken from it. God does it, that men should fear before Him. (Ecclesiastes 3:14)

Louisiana Democrat faces up to 235 years in prison if convicted on all 16 counts in corruption case.

6. Vladimir Putin to Visit Bush at Kennebunkport in July - Reuters

President George W. Bush will host Russia's President Vladimir Putin in July amid tensions over U.S. plans to build a missile shield in Europe and criticism that Moscow is retreating on democracy. Putin will visit Bush at his parents' home in the resort town of Kennebunkport, Maine, July 1-2, White House spokesman Tony Snow said on Wednesday.

· Father we ask that all hidden agendas in Mr. Putin be revealed at this meeting. We pray Your anointing upon President Bush for strength and words of truth that will dispel all darkness and bring about positive change in the direction of Russia. · "The thoughts of the righteous are right, but the counsels of the wicked are deceitful." (Proverbs 12:5)

Proving that it's not easy to make anything in Iraq secure, the security of the new U.S. embassy under construction in Baghdad has been compromised. The building plans were published on the Internet. The project will be the United States' largest diplomatic mission. Security for people within the sensitive facility is now compromised with the publication of computer-generated plans of the nearly complete fortified compound.

· Through the power of Your Holy Spirit, You Lord, have given us wisdom and foreknowledge to catch these people who plot evil against our nation; we thank You Lord! We cry out for a greater anointing to find all the secret plans against this nation! Lord, we bind the spirit of Judas that compels these people to plot against our nation; we ask You to release Your angels to put a hedge of protection around us and everything that pertains to us , in Jesus Christ's precious name! Amen! · "And I will give you the keys of the kingdom of heaven, and whatever you bind on earth will be bound in heaven, and whatever you loose on earth will be loosed in heaven." (Matthew 16:19)
Posted by Capitol Hill Prayer Partners at 11:17 AM