"Let God arise, let his enemies be scattered: let them also that hate him flee before him...let the wicked perish at the presence of God." (Psalms 68:1-2)

Egypt and Jordan were informed Tuesday that Iranian president Mahmoud Ahmadinejad disapproves of their "moderate" stance towards Israel and holds them accountable for "helping the Zionist regime oppress the Palestinian people [sic]." They are guilty, he said, of "betrayal." Although the majority of Egyptians and Jordanians hate Israel and support efforts to destroy it, the leadership in both countries has signed peace agreements with the Jewish state. Ahmadinejad has ambitions to dominate the Middle East by rushing to fill the void left when a "defeated" United States pulls its soldiers out of Iraq. Middle East observers expect that, with 45 percent of Middle East oil then under its control, and with nuclear weapons within reach, Tehran will seek to coerce Saudi Arabia, Egypt and Jordan into once again adopting rejectionist policies towards Israel. 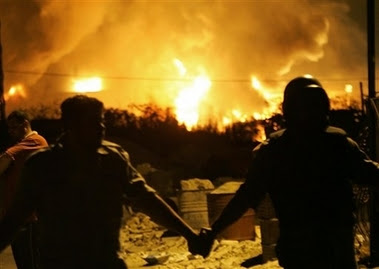 Angry drivers set fire to some gasoline stations here after the government announced that fuel would be rationed beginning Wednesday. The government first planned to start the rationing a year ago, but put the decision off repeatedly out of fear that it would lead to unrest. The plan was announced only a few hours before it took effect. State television reported Wednesday that "several gas stations and public places had been attacked by vandals." Traffic jams developed near some gasoline stations as police officers worked to control long lines.

Early this week, Tehran deployed in southern Iraq and southern Iran contingents of Revolutionary Guards Corps of suicide fighters in anticipation of an American attack on Iranian soil. The RG fighters were dropped by helicopter in southern Iraq on June 24 and 25. Their task will be to launch suicide attacks on US and British bases and command posts in the region the moment Iran comes under American attack.

4. Ahmadinejad: When We Go Nuclear Everything Will Change - Israel National News

Iranian President Mahmoud Ahmadinejad said Wednesday that "the Iranian nuclear subject has become the nations' Number One subject today. With the help of Allah victory is near, because once Iran becomes nuclear everything will change in its favor." With regard to the conflict over the Land of Israel, Ahmadinejad said "if we remain silent today and we do not talk about Palestine, tomorrow we shall also have to be silent about Tehran."
Posted by Capitol Hill Prayer Partners at 9:41 PM