A videotape shows Sen. Hillary Clinton committing felonies and should be admitted as new evidence in a California civil case, says a forthcoming legal brief to be filed by Friday. The tape shows Clinton speaking in 2000 with Peter Paul, a Hollywood mogul, and comic book icon Stan Lee about a massive fundraising event for her 2000 Senate race.

· Lord we ask that Your truth begin to shine within the heart of Hillary Clinton, to convert her soul. We ask that secrets be revealed in all Presidential Candidates, and that You deal with all sin that may be hidden from public view. "The way of the wicked is like darkness; they do not know what makes them stumble." (Proverbs 4:19)

England More than 20,000 people braved heavy rain and clouds of cannabis smoke to celebrate the summer solstice at Stonehenge. . . Druids, pagans, punks and New Age travelers mingled with the merely curious, despite the unfortunate weather. It was the first gathering at Stonehenge since the reclassification of cannabis and police were concentrating their attention on those suspected of possession with intent to supply rather than just smoking it.

· Lord at this time when England is struggling in all areas against the dominions who seek to control her, we ask that you reveal to her leadership Your ways. You said that your Holy Spirit was sent to convict the world of sin, of righteousness, and of judgment, so we ask that You move in power across England to change the hearts of the people. (John 16:8) 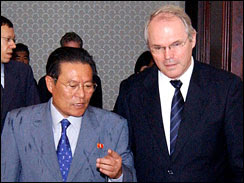 The top U.S. envoy to disarmament talks with North Korea arrived in the communist country Thursday in the first high-level visit by a U.S. official there in more than 4 1/2 years. The surprise trip by nuclear negotiator Christopher Hill followed the resolution this week of a banking dispute that had held up progress toward disarmament for more than a year, and the announcement that U.N. nuclear monitors would visit the communist nation next week.

· Lord we ask Your protection for Mr. Hill as he completes his task. We ask that no secrets or lies be perpetuated while he is there, and that You reveal truth to him. · "Would not God search this out? For He knows the secrets of the heart." (Psalm 44:21)

4. America Is Not 'Sicko,' Filmmaker to Tell Lawmakers - CNSNews.com A young filmmaker is heading to Capitol Hill on Thursday to discuss his views of the country's health care system. But it's not Michael Moore, and the message, in contrast to that promoted by the liberal activist, is that the U.S. is not "sicko."

· Father we take authority over the liberal lies perpetuated by Michael Moore, and bind them from permeating the investigations and hearings over healthcare. We ask that Your wisdom and truth be the guide for our nation's legislators as they review healthcare recommendations. · "But those who rebuke the wicked will have delight, and a good blessing will come upon them." (Proverbs 24:25)

Roscoe, NY- Searchers recovered the body of one person killed after flash floods surged through New York's Catskill Mountains and were looking for up to six people missing.

· Father may Your knowledge assist the emergency workers as they complete the tasks before them in this tragedy. We ask that You comfort the families of those who mourn, and be merciful in the cleanup and rebuilding of their lives. · "To comfort all who mourn, to console those who mourn in Zion, to give them beauty for ashes, the oil of joy for mourning, the garment of praise for the spirit of heaviness." (Isaiah 61:2, 3)
Posted by Capitol Hill Prayer Partners at 6:29 PM