At the very end of a lengthy and rambling speech on Wednesday, Iranian President Mahmoud Ahmadinejad surprisingly announced that he would pardon and set free 15 British sailors seized nearly two weeks ago. Iran has insisted that the sailors violated its territorial waters, but Britain said the sailors, including one woman, were in international waters. Ahmadinejad took the moral high ground, calling on people to follow the words of the Muslim prophets and asking why the British had sent a female sailor, who is a mother, to carry out such a dangerous mission. The Iranian president also acknowledged that Iran wouldn't get a formal apology and said that Britain was not brave enough to admit its error.

Middle East expert Dr. Mordechai Kedar said that the Iranians must have agreed to release the sailors because they understood that they had no other choice in light of Blair's announcement that they had 48 hours to release the sailors before Britain would take other measures. Some media reports this week suggested that the U.S. intended to mount an attack against Iranian nuclear facilities.

• May the Iranian lies stop, our Father! May the lies of those who hate You and Your chosen nation, Israel, be stopped! May those who are physically held captive be set free; and those who live in spiritual bondage and oppression be loosed for Your glory! May nothing stop You and Your plans to redeem the children of Israel and Ishmael!
• "For who has stood in the counsel of the Lord, and has perceived and heard His word? Who has marked His word and heard it? Behold, a whirlwind of the Lord has gone forth in fury-- A violent whirlwind! It will fall violently on the head of the wicked. The anger of the Lord will not turn back until He has executed and performed the thoughts of His heart." (Jeremiah 23: 18-20 NKJV) "Since you are precious and honored in my sight, and because I love you, I will give men in exchange for you, and people in exchange for your life." (Is. 43:4)

President Bush denounced "irresponsible" Democrats on Tuesday for going on spring break without approving money for the Iraq war with no strings. He condemned House Speaker Nancy Pelosi's trip to Syria, too, accusing her of encouraging a terrorism sponsor. Given his promised veto of anything containing a deadline - and the likelihood that his veto would be sustained on Capitol Hill - Bush said Democrats are merely engaging in games that "undercut the troops." "Democrat leaders in Congress seem more interested in fighting political battles in Washington than in providing our troops what they need to fight the battles in Iraq," Bush said. "In a time of war, it's irresponsible for the Democrat leadership in Congress to delay for months on end while our troops in combat are waiting for the funds."

Nearly two months ago, Bush asked for more than $100 billion to pay for the wars in Iraq and Afghanistan this year. The final version of the bill is not expected to reach Mr. Bush's desk until late this month. It is expected that with the narrow margins the bills passed by in both houses, mostly along party lines, it is unlikely that Democrats in either chamber will have the two-thirds majority needed to overturn a veto.

• Dear Lord, just as You confirmed Abraham's faith when You provided a ram for the blood sacrifice instead of his son, Isaac; may You provide the resources needed by our troops to complete the Good Work of salvation that You have started in Iraq! • "My son, God will provide." (Genesis 22:8 NKJV)

Pelosi said Assad assured her of his willingness to engage in peace talks with Israel, and that she and other members of her congressional delegation raised their concern about militants crossing from Syria into Iraq, as well the Israeli soldiers kidnapped by the Lebanese militant group Hezbollah and the Palestinian group Hamas. Also, the delegation gave the Syrian leader a message from Israeli Prime Minister Ehud Olmert, whose essence was that Israel was ready to hold peace talks with Syria.

Bush said Pelosi’s trip signals that the Assad government is part of the international mainstream when it is not. The United States says Syria allows Iraqi Sunni insurgents to operate from its territory, backs the Hezbollah and Hamas militant groups and is trying to destabilize the Lebanese government. Syria denies the allegations. “A lot of people have gone to see President Assad and yet we haven’t seen action. He hasn’t responded,” he told reporters soon after she arrived in Damascus on Tuesday. “Sending delegations doesn’t work. It’s simply been counterproductive.”

• God has a special hatred for false prophets and oracles because of the deception and harm they do to the innocent. Woe to Nancy Pelosi and those in her delegation who believe that they know the difference between "right and wrong," and deceitfully force their will on others! • " ' Behold, I am against those who prophesy false dreams,' says the Lord, 'and tell them and cause My people to err by their lies and by their recklessness. Yet I did not send them or command them; therefore they shall not profit this people at all," says the Lord.' " (Jeremiah 23: 32 NKJV) 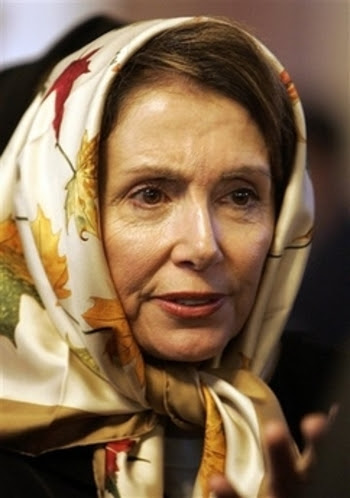 Pelosi did not comment on Bush’s remarks but went for a stroll in the Old City district of Damascus, where she mingled with Syrians in a market. Following Muslim dress codes, Pelosi, wearing a flowered head scarf and a black abaya robe, visited the 8th-century Omayyad Mosque. She made the sign of the cross in front of an elaborate tomb which is said to contain the head of John the Baptist. About 10 percent of Syria’s 18 million people are Christian.

• Stand in the gap for Nancy Pelosi, for she knows not what she does. To don this type of clothing is one sign of either submission, or at least agreement, with those who follow a false god, allah. Cry out for mercy for our nation as our top leaders continue to fall prey to the seducing influences of Islam in our land. • "Neither our kings nor our princes, Our priests nor our fathers, Have kept Your law, Nor heeded Your commandments and Your testimonies, With which You testified against them. For they have not served You in their kingdom, . . . Nor did they turn from their wicked works." (Nehemiah 9:34,35)

A Texas legislator wants to require the state's nearly 1,700 public school districts to teach the Bible as a textbook, "not a worship document."The Texas House Public Education Committee was set late Tuesday to consider — but not vote on — a bill by Rep. Warren Chisum, R-Pampa, mandating high schools to offer history and literacy courses on the Old and New Testaments. The courses would be elective. 10 Steps to Bible Literacy

The idea of teaching the Bible in school seems to be undergoing a revival nationally. Two literature classes on the Bible are included on a list of state-approved courses that Georgia public schools could choose to offer beginning next year. Some critics say it would be the first state to take an explicit stance endorsing and funding biblical teachings. The Texas measure goes a step farther — requiring school districts to make such courses available, advocates on both sides agreed.

• May You be glorified in the teaching of Your Word in public schools throughout America, O God! May just the mention of Your Word bring many to a saving knowledge of Your Son, Jesus Christ. May those who oppose You not be able to stop what You intend to bring about so that many will be saved alive! • "For the Word of God is living and powerful and sharper than any two-edged sword, piercing even to the division of soul and spirit, and of joints and marrow, and is a discerner of the thoughts and intents of the heart." (Hebrews 4: 12 NKJV)

The 2007 Atlantic hurricane season should be "very active," with nine hurricanes and a good chance that at least one major hurricane will hit the U.S. coast. Top weather researcher and forecaster, William Gray, said he expects 17 named storms this year, five of them major hurricanes with sustained winds of 111 mph or greater. "The probability of a major hurricane making landfall on the U.S. coast this year is at 74 percent, compared with the average of 52 percent over the past century," he said. Gray's research team at Colorado State University makes forecasts based on global oceanic and atmospheric conditions.

• Dear Lord, may we be as certain of Your Word and its promises, as we are in wanting to believe man's weather predictions! May this year's Hurricane season be remembered as the season that You calmed (just as You did last year!). • "My soul melts from heaviness; strengthen me according to Your Word." (Psalm 119: 28 NKJV)

Posted by Capitol Hill Prayer Partners at 12:13 AM