Iran will mark “National Nuclear Day” on April 9 in a ceremony at the uranium enrichment plant in Natanz, the International Atomic Energy Agency (IAEA) said. President Mahmoud Ahmadinejad, who is scheduled to take part in the event, said Iran will issue an important statement on its nuclear program next week.

A Kuwaiti newspaper warned Wednesday that the United States was planning a missile strike against Iran some time in April. In an editorial citing unnamed Washington sources, As-Siyasa said air-to-surface missiles could be used in U.S. strikes against Iran, but that no ground operation would be launched to avoid casualties among U.S. service personnel. 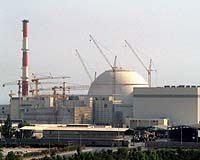 File photo of Iran's Bushehr reactor.
Kuwait has asked NATO for help to battle a nuclear weapons attack. Officials said the sheikdom has requested that NATO provide expertise on ways to combat nuclear radiation fallout. They said the Western alliance was asked to send a team of specialists to Kuwait.

“Israel's intelligence community has assessed that Iran and Syria were preparing for war in mid-2007. Officials said the war was expected to be sparked by a U.S. strike on Iran's nuclear weapons facilities. At that point, they said, Iran, Syria and Hizbullah would also attack Israel with a range of missiles and rockets. ‘Nobody wants to initiate the war, but everybody is ready to join,’ an official said.