With protesters shouting "Troops home now!" to back Democratic demands, the House late on Wednesday, passed a $124.2 billion war-funding bill that would require troop withdrawals to begin Oct. 1 with the goal of completing the pullout six months later. Bush has promised to veto the bill and has enough Republican votes to sustain his objection.

Democrats brushed off a White House veto threat and pleas for patience from the top U.S. commander in Iraq Wednesday, General David Petraeus, and pushed toward a vote demanding that troops begin coming home this fall. Their insistence guarantees a historic showdown with President Bush, the first on the war since Democrats took control of Congress in January.

· Please pray for President Bush and our nation as it heads down this dark passage in its history of being the "Land of the Free and the Brave." · "Behold, the Lord's hand is not shortened, that it cannot save; nor His ear heavy, that it cannot hear." (Isaiah 59: 1 NKJV)

The Office of Special Counsel will take a close look at the last six years of White House political operations under the oversight of President Bush's adviser Karl Rove. The new investigation, which will examine the firing of at least one U.S. attorney, missing White House e-mails, and White House efforts to keep presidential appointees attuned to Republican political priorities, could create a substantial new problem for the Bush White House.

· Karl Rove is in a state of wanting to know the Lord. Pray that he will yield to God's plan and not his own. May he and the Bush administration be saved from its enemies! · "Then you shall call, and the Lord will answer; you shall cry, and He will say, 'Here I am.'" (Isaiah 58: 9a NKJV)

New York Gov. Eliot Spitzer will introduce a bill in the coming weeks to legalize same-sex marriage in New York before adjournment in June, his spokeswoman said Friday; a move that would propel New York to the forefront of one of the most contentious issues in politics. This coming Tuesday, May 1st is targeted as a major lobbying day for same sex marriage by homosexual groups in the New York Assembly.

Meanwhile, homosexual activists are watching several key bills move through the Democrat-controlled Congress, a development that could result in the greatest expansion of federal protections for gays and lesbians in U.S. history. This week, a key House committee is set to approve a measure that would in some cases make hate crimes based on a victim's sexual orientation a federal offense, as are crimes committed on the basis of the race or religion of the victim. Also, a bipartisan group of House members introduced a bill yesterday that would ban workplace discrimination based on sexual orientation or gender identity. Both pieces of legislation are on track for congressional approval in the coming months.

They also have set their sights on equal tax treatment of domestic partnership benefits -- the Internal Revenue Service considers such benefits taxable income, unlike benefits available to heterosexual spouses -- and to repeal the armed forces' "don't ask, don't tell" policy.

· Dear God, what Lawrence v. Texas has wrought! Please release our country from the demons of homosexuality, pride, arrogance and any others, including abortion; that indwell the extreme left. ·"Their feet run to evil, and they make haste to shed innocent blood; their thoughts are thoughts of iniquity; wasting and destruction are in their paths." (Isaiah 59: 7 NKJV) 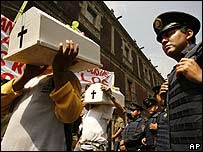 In a Tuesday vote to make abortion legal, Mexico City lawmakers set forth legislation that is expected to set forth a new wave of policies and health programs not only throughout the nation, but in other parts of Roman Catholic Latin America, as well.

· May Your Church finally rise up and call abortion murder! May the killing of the innocents stop, Dear Jesus; and the abortionists and their enablers be frozen from any more destruction! May Mexico City be forgiven for this abomination. · "For your hands are defiled with blood, and you fingers with iniquity; your lips have spoken lies, your tongue has muttered perversity." (Isaiah 59: 3 NKJV)