President Bush reiterated his veto threat Wednesday night after the bill's passage, saying the bill "crosses a moral line that I and many others find troubling. If it advances all the way through Congress to my desk, I will veto it."

• Give thanks for President Bush's firm moral stand on embryonic stem cell research. Pray that a respect for life in America will increase and that our people would return to a "God consciouness" that brings wisdom and discretion. • "My son, let not them depart from thine eyes: keep sound wisdom and discretion: so shall they be life unto thy soul, and grace to thy neck. Then shalt thou walk in thy way safely, and thy foot shall not stumble." ( Prov. 3:21-23)


2. Gates Says Congress' Delay In Funding War Will Soon Have A Negative Impact On The Army - USA Today

With both sides refusing to back down, the Pentagon says the delay will soon force the Army to begin scaling back upgrades of barracks, repair and maintenance of equipment as well as training of Guard and Reserve units. In a letter to congressional appropriators, Defense Secretary Robert Gates said budget problems would be compounded by the increased number of troops fighting in Iraq.

• Pray for a quick decision and the breaking open of the funds to complete the objectives in Iraq. Pray that we stand by our troops with needed supplies and that they not suffer. • "Their Redeemer is strong; the Lord of host is his name: he shall thoroughly plead their cause, that he may give rest to the land, and disquiet the inhabitants of Babylon." (Jeremiah 30:34

Citing testimony from detainees in U.S. custody, Maj. Gen. William B. Caldwell said Iranian intelligence operatives were backing the Sunni militants inside Iraq while at the same time training Shiite extremists in Iran. "The death and violence in Iraq are bad enough without this outside interference," Caldwell said. "Iran and all of Iraq's neighbors really need to respect Iraq's sovereignty and allow the people of this country the time and the space to choose their own future."

• Father, You alone raise up and put down authority. You alone are sovereign over all. Establish Your rule in Iraq. Give the power to the Iraqis to have absolute control of their government and country. • "The LORD is exalted; for he dwelleth on high: he hath filled Zion with judgement and righteousness. And wisdom and knowledge shall be the stability of thy times and strength of salvation: the fear of the Lord is his treasure." (Is. 33:5-6)

4. "Because We Are Working As Fast As We Can" - Bloomberg

Iraqi Prime Minister Nuri al-Maliki said the U.S. shouldn't set a deadline for withdrawing its troops from his country because the handover of power to Iraqi security forces is already taking place as quickly as possible. "There is no need for a timetable because we are working as fast as we can," al-Maliki said today at a press conference in Tokyo. "What will govern the departure of troops will be victories achieved on the ground and not a timetable." . . . "To demand the departure of troops is a democratic right and a right that is being exercised within Iraq and in the U.S. Congress," al-Maliki said.

• Pray for Iraqi security forces to be strengthened and a speedy victory to complete transfer of power. • "For evildoers shall be cut off: but those that wait upon the LORD, they shall inherit the earth. But the meek shall inherit the earth; and shall delight themselves in the abundance of peace. The wicked plotteth against the just and gnasheth upon him with his teeth. Wait on the LORD, and keep his way and he shall exalt thee to inherit the land: when the wicked are cut off, thou shalt see it." ( Ps. 37:9-12,34)

The nation's intelligence director announced broad changes at U.S. spy agencies Wednesday, including an expedited effort to improve collaboration and speed up the screening of job applicants who speak Arabic or have other crucial skills. Retired U.S. Navy Adm. J. Michael McConnell, the director of national intelligence, outlined what he described as a 100-day plan to fix problems that have persisted in the nation's spy community despite a host of reforms since the Sept. 11 attacks. McConnell said his top priority is to improve collaboration among U.S. spy agencies.

• Father, we pray for Your wisdom to guide the intelligence overhaul. Thank You for bringing forth strategies that will enable these agencies to work together effectively. We ask that the 100-day plan be successful according to Your plan in delivering us from evil. • "When wisdom entereth into thine heart, and knowledge is pleasant unto thy soul; discretion shall preserve thee, understanding shall keep thee." (Prov. 2:10-12)

The White House on Wednesday emphatically rejected calls for national catastrophe insurance as Florida Gov. Charlie Crist and the state's senators implored Congress for federal help to cap the spiraling cost of hurricane insurance. Echoing some congressional critics, Edward Lazear, the chairman of the Council of Economic Advisers, said a federal program would unfairly penalize taxpayers in areas that weren't prone to disasters and could lead to more development in hurricane-prone areas because homeowners wouldn't "bear the full expected costs of damages occurred." A "federal backstop," Lazear said, would mean that taxpayers nationwide would subsidize insurance rates 'for the benefit of a relatively small group of people in high-risk areas.'"

• Continue to pray for wisdom and righteous judgement for our national advisors, particularly regarding the equitable distribution of wealth and tax burdens on all American citizens. May the people who live in areas prone to hurricanes may themselves be granted wisdom in financial planning, too. • "The Lord bringeth the counsel of the heathen to nought: he maketh the devices of the people of none effect. The counsel of the Lord standeth for ever, the thoughts of his heart to all generations. Blessed is the nation whose God is the Lord; and the people whom he hath chosen for his own inheritance." (Ps. 33:10-12) 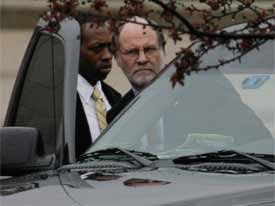 Corzine suffered numerous broken bones and was airlifted to Cooper University Hospital in Camden, where he immediately underwent emergency surgery. He is now listed in critical but stable condition, and doctors say he'll undergo several more operations. Corzine, who may not have been wearing a seat belt, suffered a broken leg that ruptured his skin, a broken sternum, broken collarbone, and six broken ribs on each side along with a broken vertebrae and head lacerations.

• Pray for Governor Corzine, for full healing and recovery. Pray, too, that the other driver in this crash be located quickly and brought to justice. • "Surely he hath borne our griefs, and carried our sorrows: yet we did esteem him stricken, smitten of God, and afflicted. But he was wounded for our transgressions, he was bruised for our iniquities: the chastisement of our peace was upon him; and with his stripes we are healed." (Isaiah 53:4,5)

The Eighth Circuit Court of Appeals on Thursday heard arguments in a case that will decide whether a leading Bible distribution group will be allowed to hand out the religious texts at public schools. Gideons International, the 108-year-old missionary organization best known for its hotel distribution program, passed out Bibles to students in Missouri's South Iron R-1 School District under a policy allowing the open distribution of non-educational material. But the American Civil Liberties Union filed suit, prompting District Judge Catherine Perry to issue a preliminary injunction last September halting the Bible distribution.

• As these judges now weigh this decision, pray that man's law will honor God's law, and for the free distribution of Bibles on public property in America. • "All the commandments which I command thee this day shall ye observe to do, that ye may live, and multiply, and go in and possess the land which the LORD sware unto your fathers." (Deut. 8:1)

Posted by Capitol Hill Prayer Partners at 12:06 AM