The next two days are "fairly critical" to resolving the dispute over a seized British navy crew, British Prime Minister Tony Blair said Tuesday, after Iran's chief international negotiator offered a new approach to end the standoff with Tehran. Blair told Scotland's Real Radio that Ali Larijani's suggestion of talks offered hope of an end to the crisis. "If they want to resolve this in a diplomatic way the door is open," the prime minister said.

• As American ships are poised now in the Persian Gulf, and as the intensity of this hostage crisis has increased, offer intercession and seek GOD for an answer to this standoff. He can yet make a way to settle this issue peacefully. • "Since you are precious and honored in my sight, and because I love you, I will give men in exchange for you, and people in exchange for your life." (Is. 43:4)

Cheney blasts Dems for plan to tie funding to pullout timetable; Sens. Reid and Feingold push bills to set deadline. • Lord You alone can bring about unity in our government by the moving of Your Spirit. We have failed to bring about cohesion in our leadership, and we ask Your forgiveness for the resulting divisions. Lord we, as Your people, humbly ask that You intervene on behalf of our nation and the nation of Iraq to bring about Your perfect will in the earth. • "If My people who are called by My name will humble themselves and pray and seek My face, and turn from their wicked ways, then I will hear from heaven, and will forgive their sin and heal their land." (2 Chronicles 7:14) 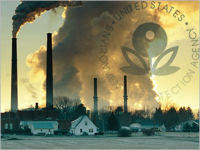 For the first time in its history, the U.S. Supreme Court has waded into the political debate on global warming. Under the Bush administration, the Environmental Protection Agency or EPA has argued that carbon dioxide and the like aren't pollutants under the Clean Air Act, and therefore, the agency has no power to regulate them. • Continue to pray in the spirit over any issue that appears in the headlines under the name "global warming" or "climate change." There are vast forces at work behind the scenes that would use this issue as a subterfuge to force all nations into submission to a one-world government. Pray that the Bush administration be granted wisdom now as they interpret and respond to this ruling by the U.S. Supreme Court. • "I will instruct you and teach you in the way you should go; I will guide you with My eye." (Psalm 32:8)

The U.S. House passed a $2.9 trillion budget Thursday that Republicans say will result in the largest tax increase in history because it does not extend the president’s tax cuts, which are expected to expire in 2010.

• Lord we ask that You direct everyone in our government to do things that are beneficial for our people. As this budget now goes to the Senate, we pray for mercy, so that the tax cuts already in place would be extended. Let Your wisdom be upon all of our government leaders! • "Therefore if you have not been faithful in the unrighteous mammon, who will commit to your trust the true riches? And if you have not been faithful in what is another man's, who will give you what is your own?" (Luke 16:11,12)

Sens. Sam Brownback, R-Kan., and Mary Landrieu, D- La., reintroduced a bill Thursday to ban all human cloning. The Human Cloning Prohibition Act would eliminate the practice no matter what its called. Carrie Gordon Earll, senior analyst for bioethics at Focus on the Family Action, said the measure would protect innocent life and keep the best interest of women in mind.

• Thank You Lord, that there are people on both sides of the aisle that believe that life is sacred and deserves to be protected. Pray that there will be nothing passed - now and in the future – that will allow funding for human cloning. • "And keep the charge of the Lord your God: to walk in His ways, to keep His statutes, His commandments, His judgments, and His testimonies, as it is written in the Law of Moses, that you may prosper in all that you do and wherever you turn." (1 Kings 2:3)

A senior Bush administration official said Washington would wait to see whether Khartoum had indeed reversed course. “We are very skeptical that Bashir has agreed to any such thing. U.S. officials from the State, Defense, Treasury and other departments had told Reuters that Washington would “tighten the screws'' on Sudan with fresh measures, likely within days.

• Pray for Sudan’s President, Omar al-Bashir, his cabinet and all in authority; may he yield to the pressure brought on by the international community; may a spirit of cooperation sweep through his government and the leaders and warlords fighting throughout the country. Pray for the safety of Sudanese Christians and their families; pray that they would come together in unity and prayer for the end to bloodshed and the beginning of righteous and just government. (Intercessors for America)
• "And when all the kings who were servants to Hadadezer saw that they were defeated by Israel, they made peace with Israel and served them. So the Syrians were afraid to help the people of Ammon anymore." (2 Samuel 10:19)

One of the State Department’s most experienced Middle East hands; Ryan Crocker has already served as ambassador to Kuwait, Syria, Lebanon and Pakistan, with postings to Iran, Qatar, Egypt and Afghanistan. He takes control at the largest American Embassy in the world. Sitting next to Crocker at the ceremony in the U.S. Embassy, housed in Saddam Hussein's former Republican Palace in the Green Zone, was U.S. commander in Iraq Gen. David Petraeus, who only recently took over military operations.

• May the Lord give godly wisdom, fresh vision, effective tactics and direction to these two leaders as they assume new responsibilities. • "And they helped David against the bands of raiders, for they were all mighty men of valor, and they were captains in the army. For at that time they came to David day by day to help him, until it was a great army, like the army of God." (1 Chronicles 12:21,22)

Posted by Capitol Hill Prayer Partners at 11:58 AM