A House subcommittee on Wednesday rejected a Republican-led effort to open up more U.S. coastal waters to oil exploration on a 9-6, party-line vote in a House appropriations subcommittee. Rep. John Peterson (R-PA), spearheaded efforts to approve the proposal as part of an Interior Department spending package. His plan would open up U.S. waters between 50 and 200 miles off shore for drilling. The first 50 miles off shore would be left alone. According to Peterson's office, the U.S. Minerals Management Service estimates that 86 billion barrels of oil and 420 trillion cubic feet of natural gas can be found along the U.S. outer continental shelf, the area affected by the ban. Most offshore oil production and exploration has been banned since a federal law was passed in 1981.

· Dear Lord, how much longer will our nation be held hostage by a Congress that will not help exploration efforts for America's natural oil resources that You have already given us? We ask that You would change hearts in the Congress and throughout environmental activist organizations that have long held up new drilling and the building of refineries in our country in the name of "mother nature." We cry out to You for relief. YOU are our only hope.

· "For thus says the High and Lofty One Who inhabits eternity, whose name is Holy: 'I dwell in the high and holy place, with him who has a contrite and humble spirit, to revive the spirit of the humble, and to revive the heart of the contrite ones.'" (Isaiah 57: 15 NKJV) 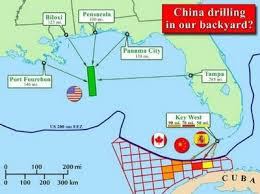 House Republicans want the American people to know that right now -- around 60 miles off the coast of Key West, Fla. -- China is drilling for oil, thanks to a lease issued by Cuba; and that Democrats in Washington are blocking the United States from conducting its own environmentally-safe oil and gas exploration in similar U.S. coastal areas. House Republican leader John Boehner said Tuesday: "By prohibiting the United States from taking part in the same type of energy exploration that the Chinese are conducting just miles off our shores, the Democratic Majority on Capitol Hill continues to prove itself complicit in an energy crisis that has saddled American families and small businesses with gas prices that have reached $4.05 per gallon today."

On Wednesday, the U.S. Energy Department said gasoline prices are expected to remain close to $4 a gallon through 2009. Republicans are pushing an energy plan that would expand domestic oil exploration and production; encourage the opening of new American oil refineries; and invest in alternative energy sources such as wind, nuclear, and captured carbon dioxide.

· Heavenly Father, it is unbelievable that a foreign nation, leasing "oil drilling rights from Cuba," would have the ability to drill directly off of America's shores while we cannot tap into our own oil resources. They are stealing our oil. Please stop the blindness of our Congress and activists to our fuel needs, God. May our nation be saved from this crippling assault. For Your glory and in Your Name we pray. Amen.

President Bush and German Chancellor Angela Merkel both want to keep Iran from developing nuclear weapons but they're standing on opposite sides of a revolving door. He's on his way out of office. She's trying to stay in.

Also, President Bush said Wednesday that his gun- slinging rhetoric made the world believe that he was a "guy really anxious for war" in Iraq. He said that his aim now was to leave his successor a legacy of international diplomacy for tackling Iran.

· We pray for President Bush that he would leave a legacy that shows he sought and still seeks Your divine guidance in all of his decision making. We also ask for wisdom for him, Chancellor Merkel and other international leaders as they seek to keep Iran from using nuclear devices against Israel and the world.

House Speaker Nancy Pelosi consistently has said impeachment was "off the table," and House Majority Leader Steny H. Hoyer (D-Md.) suggested yesterday that engaging in a lengthy debate over impeaching Bush in the waning days of his administration is not a productive use of the House's time.

· We implore You, Father, to protect President Bush, and stop the incessant hatred of the left against him. May those who continue to attack him without reason, know that they also attack You and that there is a cost for their misguided actions. Somehow through this, may they be saved unto Your Son. In Your Name we pray. Amen.

· "Woe to those who devise iniquity, and work out evil on their beds! At morning light they practice it, because it is in the power of their hand." (Micah 2: 1 NKJV)

Barack Obama discussed Darfur, the Iraq war, gay rights, abortion and other issues Tuesday with Christian leaders, including conservatives who have been criticized for praising the Democratic presidential candidate. Joshua Dubois, the Obama campaign's director of faith outreach, said the meeting included "prominent evangelicals and other faith leaders" who "discussed policy issues and came together in conversation and prayer." Similar sessions will occur "in the months to come," he said.

And, new Democratic-based Political Action Committee (PAC) called "The Matthew 25 Network," will endorse Barack Obama by reaching out to the diverse Christian community and engaging people of diverse Christian faiths including evangelicals, Protestants, Hispanic evangelicals and Catholics. The goal of the group is to show that faith "is not just Republican territory anymore," by giving voice to Christians whose gospel values are expressed or lived out in the passage of Matthew 25, especially verse 45, that we should care for the 'least of these' as Jesus did.

· God of the Universe, we humbly ask that You will have Your Holy Spirit intercede for the revelation and understanding of Christians everywhere what this man stands for and what he will do if elected President of the United States. May his indifference to You and Israel, Your creation of life, as well as his controversial background disqualify him from higher office. May Your Word not be used for the Obama campaign's gain. May he be brought to a place where he will allow You to minister to him and show him his, his family's and supporter's need for Your Son. In Your Name we pray. Amen.

· May all understand Your true meaning of Matthew 25 that "The Son of Man will Judge The Nations: "When the Son of Man comes in His glory, and all the holy angels with Him, then He will sit on the throne of His glory. All the nations will be gathered before Him, and He will separate them one from another, as a shepherd divides his sheep from the goats. And He will set the sheep on His right hand, but the goats on the left.


1. Olmert warns new US administration may not be as 'friendly' - Ynet News

Prime Minister Ehud Olmert said Tuesday Israel should push to advance peace talks the Palestinian Authority in the final months of US President George W. Bush's term in office as, "there is no telling what thing would look like once a new president is elected."

Prime Minister Ehud Olmert is likely to initiate the end of his political career on Wednesday when he is expected to give the authorization necessary for a primary in Kadima to replace him.

With his legacy tainted by war and militancy, President Bush has vowed that his final six months in office will be defined by diplomacy, including an intense effort to secure an agreement which will lead to the establishment of a Palestinian state.

A deeply controversial plan put forth by MIT scientists to end the standoff over Iran's nuclear program is getting increased interest from senior members of both parties in Congress and nonproliferation specialists.

US President George W. Bush, pushing for a tougher international stance against Iran's nuclear ambitions, came together with his European partners Tuesday to embrace financial sanctions beyond those the United Nations already has undertaken to pressure Tehran.

With interest in atomic energy soaring throughout the Middle East - prompting fears of a regional nuclear arms race - a leading ally is warning the United States to broaden its nonproliferation efforts beyond Iran.

4. Next 'Weapon' Against Iran May Be Gasoline - NY Sun

With President Bush securing a new round of European sanctions on Iran's banks, he and Congress are looking to additional measures to squeeze the mullahs at the gasoline pump.


(All news in this section is taken from Worthy News.)

An attack on a Christian school in Gaza last weekend has created fear among the strip's tiny religious minority, a Palestinian Christian said.

Two Iranian converts to Christianity jailed for the past few weeks have been released by authorities, who demanded valuable property deeds as bail collateral, a Christian news agency reported Tuesday, June 3.

At least four prominent Protestant pastors in Eritrea faced another day of uncertainty Saturday, May 31, after government officials said the church leaders may receive the death penalty for "treason", while dozens of other believers were detained in recent days, a well- informed advocacy group reported.

In its annual Trafficking in Persons Report issued last week, the U.S. State Department kept Kuwait, Oman, Qatar and Saudi Arabia on a blacklist of countries that traffic in people, while it applauded progress made by Bahrain and the UAE.

Daniel Weiss, senior analyst for media and sexuality at Focus on the Family Action, said the report does a great job highlighting problems in other nations but virtually ignores the United States' contribution to the global issue.

"There is one tiny section in almost 300 pages that speaks to the need of addressing the demand for human trafficking," he said. "However, it completely ignores the role that pornography plays in stimulating a demand that can only be satisfied by criminal sex acts.

"The U.S. still produces a majority of the world's pornography. By not enforcing our own laws against the sale and distribution of obscene pornography, we are complicit in fueling a global industry that sexually exploits and abuses women and children."

(Source: Focus on the Family; CitizenLink)

Posted by Capitol Hill Prayer Partners at 1:45 AM