The Daily Brief will not be published tomorrow, Friday, June 6, 2008.

Khalid Sheikh Mohammed said Thursday, that he would welcome the death penalty for his confessed role as mastermind of the Sept. 11 terrorist attacks.

· Father, we place Your truth over this situation and pray that Your justice prevail.

· "All of us must die eventually. Our lives are like water spilled out on the ground, which cannot be gathered up again. That is why God tries to bring us back when we are separated from Him. . ." (2 Samuel 14:14 NLT)

2. Adviser Says Clinton has Decided to End Her Campaign- Newsmax.com Hillary Rodham Clinton has decided to end her historic presidential campaign while leaving her options open to retain her delegates and promote her issue agenda, a campaign official says.

· Lord, we ask for your mercy and forgiveness over Hillary Clinton, and pray for Your visitation in her life. We pray that this will be an opportunity for You to change her heart and reveal Your love to her.

U.S. and British diplomats were attacked Thursday as they tried to investigate political violence in Zimbabwe and a U.S. Embassy employee was beaten, American officials said.

· Thank you, Lord, for Your protection over these envoys. We pray that the fruits of the current leadership in Zimbabwe would become so obvious that the corrupt influences would be removed.

· "Every tree that does not bear good fruit is cut down and thrown into the fire. Therefore by their fruits you will know them." (Matthew 7:19,20)

Al Qaeda's No. 2 leader called on Muslims to launch a holy war to break Israel's economic blockade of the Gaza Strip, in an audio recording posted Wednesday on an Islamic militant Internet site.

· Lord, we pray that you would bring about complete collapse of all extremist plans to destroy Israel whether over the Gaza Strip or any other disputed portion of the Holy Land.

· "But I have come to plead with you for my son because my life and my son's life have been threatened. I said to myself, 'Perhaps the king will listen to me and rescue us from those who would cut us off from God's people.'" (2 Sam 14:15 NLT)

5. Ahmadinejad to Japan: Prepare for a World Without the U.S. - CNSnews.com

Iran's president will likely view his meeting with Japan's prime minister as a diplomatic coup.

· Lord, You hear the ravings of Iran's president, and we pray that You will rise up against him and dispel his plans.

The California Supreme Court turned back pro-family groups June 4, by refusing to delay its "gay marriage" decision from going into effect, giving the green light for same-sex couples statewide to get "married" June 17.

· Lord, we are terribly grieved at the sin in our nation, and we rend our hearts in sorrow over this decision in California. We understand that sin has a physical consequence and the land itself will mourn because of it. (Hosea 4:3) We call out for Your mercy over the people of California, that You would remove the cloud of deception over their leaders and people, and let the wind of Your Spirit move in their midst to restore righteousness!

Syria is continuing to supply the Lebanon-based Hezbollah organization with large amounts of weapons, missiles and rockets even as it conducts indirect negotiations with Israel, defense officials in Jerusalem told Army Radio on Wednesday.

After his meeting with U.S. President George W. Bush in Washington on Wednesday, Prime Minister Ehud Olmert said that the end of Iran's controversial nuclear program was approaching.

US President George W. Bush told visiting Israeli Prime Minister Ehud Olmert on Wednesday that Iran was an "existential threat to peace" and said the world must take that threat seriously.

4. Olmert and his staff were leaving the White House's West Wing when the violent storm hit - Koenig's Int'l News 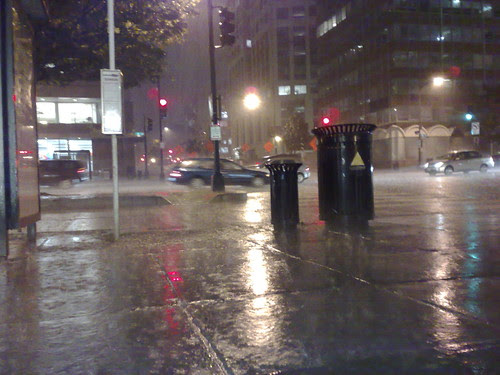 Israeli Prime Minister Ehud Olmert was leaving the White House after his 75-minute meeting with President Bush when a violent storm with wind gusts of 55 to 70 mph hit the White House and the Washington region.

Likud chairman Binyamin Netanyahu began an effort on Wednesday to prevent the formation of an alternative Kadima-led government after the eventual departure of Prime Minister Ehud Olmert.

Posted by Capitol Hill Prayer Partners at 1:13 AM