"I came not to call the righteous, but sinners to repentance." (Luke 5:32)

This week, we continue to press in during WEEK THIRTEEN of the 40 Weeks of Prayer and Fasting, to offer prayers of repentance for the sin in the church, the sin in the nation, and the blessing of Israel.

We now address these areas:

2. SIN IN THE NATION: CHINESE ISSUES (Part One) -- THE BUILDING OF THE TRANSCONTINENTAL RAILROAD

SIN IN THE CHURCH: GREED (Part One)

REPENTANCE FOR SIN IN THE CHURCH:


There's nothing wrong with having money. It's when we love it and it becomes our god, that we are in sin. "For the love of money is a root of all evils; it is through this craving that some have been led astray and have wandered from the faith and pierced themselves through with many acute (mental) pangs." (I Timothy 6:10 AMP)

Are we hoarding our blessings or are we a conduit of them? Are we giving to a ministry or to the widow or fatherless when the need arises? God's Kingdom plan is the opposite of the world's. The more we give, the more we'll receive. It's not how much we give, but how much remains once we give.

Let's look how Jesus responded to the giving of rich people and a poor widow: "Looking up, [Jesus] saw the rich people putting their gifts into the treasury. And He saw also a poor widow putting in two mites. And He said, truly I say to you, this poor widow has put in more than all of them; for they all gave out of their abundance (their surplus); but she has contributed out of her lack and her want, putting in all that she had on which to live." (Luke 21:1-4 (AMP)

SINS OF THE NATION: CHINESE ISSUES (Part One)

REPENTANCE FOR THE SINS OF THE NATION:

THE BUILDING OF THE TRANSCONTINENTAL RAILROAD 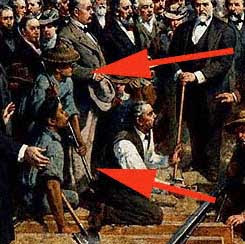 The injustices suffered by Chinese immigrants in America are too numerous to detail here. Instead, we offer a brief overview of one of the major sorrows in our nation's history: the building of the transcontinental railroad.


The Building of the Transcontinental Railroad

On the Pacific coast, Leland Stanford, Collis P. Huntington, Mark Hopkins, and Charles Crocker (known as the 'Big Four') organized the Central Pacific Railroad Company in 1862 and the next year started building east from Sacramento. Meanwhile, the Union Pacific Company started westward from Omaha. Slowly the lines crept across the land. The Central Pacific, short of labor, imported thousands of Chinese coolies to grade the roadbeds. No great earthmoving equipment was then available. The grading was done with mules and drag pans, picks, shovels, and wheelbarrows. Bridges had to be built over terrifying canyons and rivers, and tunnels had to be burrowed and blasted through the Sierra Nevadas and the Rockies. How many Chinese and other workers lost their lives as the dangerous work progressed, nobody knows. Read more.

(Taken from: Louis B. Wright, Life on the American Frontier)

The Big Four of the Central Pacific - Crocker, Hopkins, Huntington and Stanford - had gotten their project off to an earlier start after securing a loan of $1,659,000 from the State of California and untruthfully convincing President Abraham Lincoln that the Sierra Nevada began almost at Sacramento, so that the federal subsidy was forty-eight thousand dollars per mile, not sixteen thousand dollars. Using their mercantile contacts in the East, they ordered equipment and rails sent around Cape Horn to San Francisco and upriver to Sacramento. Lumberjacks cut trees in the foothills for ties and trestles, and hundreds of Chinese laborers threw up embankments and graded the right- of-way.

Tracklaying began in 1863, but the Central Pacific extended only 115 miles four years later as the construction gangs entered the mountains. Seven thousand, then ten thousand, pig-tailed Chinese "coolies" struggled against the rocks, snow, and terrible winds of the Sierra Nevada. Landslides tore away work that had taken weeks or months. Blizzards buried the roadbed and many of the workers, forcing the company to build huge snowsheds to protect the line. Chinese workers swung in baskets suspended by ropes, drilling holes for dynamite in the face of sheer rock walls. They collapsed from heat and humidity deep in tunnels driven through solid granite. Hundreds died, and still they came, recruited in China, brought to California, and taken by rail to the end of the track. They persevered.

In the summer of 1867 the Central Pacific crossed the crest of the Sierra Nevada, and the laborers moved swiftly downgrade toward the deserts of Nevada. As Casement's Irish gangs drove westward, the Central Pacific's Chinese raced them to a connection. Read more.

(from: Milner, Clyde A. II, O'Connor, Carol, Sandweiss Martha A. (eds.), The Oxford History of the American West.)

To read more about this topic, go here.

· Father God, today we offer a prayer of repentance for our treatment of these industrious Chinese laborers -- abuse which often led to their deaths. We ask You to forgive the "Railroad Barons" named in this article for their spirit of GREED, which placed the value of a "thing" ahead of the value of human life.

We lay axe to this bitter root in the history of Chinese-American relations, and we ask You to cut off the fruit from this tree of wickedness. We ask You to cleanse this portion of our history, so that no strange "incense" from the Far East would find ground to prosper in our land. We worship You, Lord, and You only, in Spirit and in Truth, amen.

Israel is in a very tense security situation. There were reports this past week of both Israel and Syria preparing to war against each other. Missiles fly daily from Gaza. Hizbullah is reportedly much stronger today than before the 2nd Lebanon War and Iran is continuing to press forward to obtain nuclear weapons.

We prayed first for the IDF's Chief of Staff, Gabi Ashkenazi, because often in both the Bible and in history all it took was one anointed leader to turn the battle.

- Abba, protect him from all political ambitions.
- Surround Ashkenazi with wise counselors. "Every purpose is established by counsel: and with good advice make war." (Proverbs 20:18); "For by wise counsel you shall make war: and in multitude of counselors there is safety." (Proverbs 24:6)
- Protect Ashkenazi from any ambush - whether spiritual or physical.

B. The IDF and other security related issues

- Thank You for the strong stance Bibi Netanyahu took this week concerning the need for the IDF to remain in Judea and Samaria to defend Israel.
- Expose Russia's wicked involvement with - and supporting of - Israel's enemies.

- Glorify Yourself O God. Arise and scatter Your enemies. (Psalm 68:1)
- Continue to confound Israel's enemies and save multitudes of Moslems.


THE SONG OF THE WEEK


This hymn was sung at the fun­er­al of Amer­i­can pre­si­dent Dwight Ei­sen­how­er at the
Na­tion­al Cathedral, Wash­ing­ton, DC, March, 1969.

To learn more about this classic hymn, go here.

THE END OF THE AGE

Everywhere around us we are experiencing a great new wave of humanity's interest in spiritism and devil worship. I must take this as one of the signs that God's age of grace and mercy is approaching the end point, It tells us that the time may be near when God proclaims: "I have seen enough of mankind's sin and rebellion, it is time for the trumpets of judgment to sound!"

If we are willing to add the appeals from the book of Revelation to the weight of the other Scriptures, we discover God saying to us that the earth on which we live is not self-explanatory and certainly not self- sufficient.

Although the earth on which we spin is largely populated by a rebel race, it had a divine origin. Now God is about to enforce His claim upon it and judge those who are usurpers. He is saying that there is another and better world, another kingdom, that is always keeping an eye on the world we inhabit.