'Exploring the Early Americas': A Sense of Continent's Direction 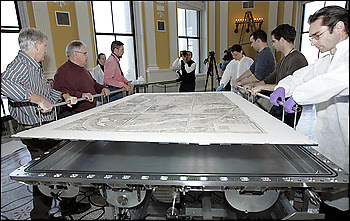 It's not that Amerigo Vespucci discovered the place. Among the European explorers, Christopher Columbus got here first. But Columbus thought he'd reached Asia, while Vespucci later posited the "revolutionary concept," says the Library of Congress, that Columbus had actually sailed to a separate continent altogether.

In honor of Vespucci's new understanding of the world, German scholar and cartographer Martin Waldseemueller called this new continent America on his 1507 world map -- the first document to name our hemisphere and the first map to show the Pacific as a separate ocean. READ MORE

Posted by Capitol Hill Prayer Partners at 2:40 AM