"He has made an everlasting covenant with me, ordered in all things, and secured. For all my salvation and all my desire, Will He not indeed make it grow? " (2 Samuel 23:5 NAS)

In what can be considered a victory for the Bush administration, Democrats were unable to override a promised presidential veto that would end their fight to reverse the president's ban on aid to family planning groups overseas that provide abortions.

Two weeks of tough negotiations at the U.N. climate conference in Bali ended at the weekend with an agreement that few seem genuinely happy about. The "Bali action plan" finalized on Saturday -- after talks went into overtime -- sets the stage for countries to negotiate a new climate change treaty within two years. That treaty would come into force when the U.N.'s Kyoto Protocol expires in 2012.

President Bush has not submitted the Kyoto Protocol to the Senate for ratification. (President Clinton did not do so either.) Bush cited the potential damage to the U.S. economy, and the fact that Kyoto does not require nations like China and India -- big CO2 emitters but still defined as developing countries -- to meet specified emission reduction targets.

· Lord, we pray for people to come to understand why President Bush has not agreed to the Kyoto Protocol. Let them understand that it is not in our best interest to agree to it. We pray that President Bush will be imbued with Your wisdom, discernment, and fortitude to do the right things.

The Senate passed the energy bill late Thursday to cheers from environmental groups, though critics argue the bill could have done more to boost energy production. House Speaker Nancy Pelosi (D-Calif.) noted that the House will take up the legislation next week.

Former Federal Reserve chairman Alan Greenspan said this morning that even though it seems more and more probable that the United States is headed into a recession, what is remarkable is that the likelihood of a recession is not already higher.

· Lord, even in a time of trials and tribulations, we will have hope because You will be with us. We pray against this prophecy of a recession, that it will not be so. We pray You will give us a covering during hard times as You covered the Israelite children during famines.

· "Beloved, do not believe every spirit, but test the spirits, whether they are of God; because many false prophets have gone out into the world." (1 John 4:1) 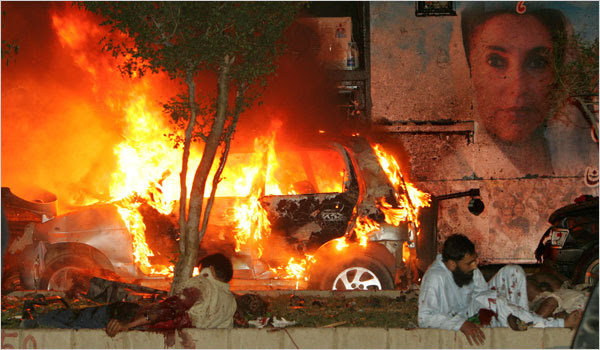 Pakistan's election campaign began in earnest on Sunday, a day after President Pervez Musharraf lifted his unpopular emergency rule and restored the constitution.

· Heavenly Father, we know You love the people of Pakistan and want the best for them. We pray for order, peace, and unity in this nation. Let multitudes be saved and the gospel spread quickly, deeply, and mightily to all. We pray that they will be bonded to us in a godly way after the elections.

· Father God, we thank You that it is written in Your word that, at that time, You alone will fight for Israel. May the nations learn of You quickly and bow their knee to You, lest judgment befall them. We pray tonight for the lost souls of China and Iran, that each one would come to know You as their Savior and Lord. Amen.

· "However, the report went around concerning Him all the more; and great multitudes came together to hear, and to be healed by Him of their infirmities."
(Luke 5:15) "And believers were increasingly added to the Lord, multitudes of both men and women." (Acts 5:14)

Iran and Russia have agreed on plans to complete the Bushehr nuclear energy reactor. Russia's state- owned Atomstroiexport, prime contractor of Bushehr, said the timetable would be announced over the next two weeks. "We have resolved all the problems with the Iranians," Atomstroiexport president Sergei Shmatko said. "We have agreed with our Iranian colleagues on a timetable for completing the plant, and we will make an announcement at the end of December."

· Lord, we pray that the Bushehr atomic power station will never be completed. Let there never be agreements between the Russians and the Iranians to share weapons, or work with each other on any projects. Let rogue nations pull back from acquiring weapons that would destroy other nations!

The Middle East in Focus
This week, for all the headlines cited below, please join us in proclaiming THIS DECREE:

A meeting between Israeli and PA final-status negotiating teams in Jerusalem Wednesday made no progress, except for an agreement to meet again at the end of December. The meeting was agreed upon during last month's Annapolis summit.

2. Palestinians to Receive Billions of Dollars in Aid - CNSNews.com

Even before the international donors conference in Paris began on Monday, the Palestinian Authority seemed to be well on its way to receiving pledges toward its $5.6 billion budget for the next three years, reports said.

4. Dichter: US report on Iran could bring about another Yom Kippur War - Ynet News

"US misconceptions regarding Iran could bring about another Yom Kippur War in our region," said Internal Security Minister Avi Dichter at a cultural event at the Holon Theater Saturday.

Hamas has completed preparation plans to counter an expected IDF invasion of the Gaza Strip, the military wing of the Islamic organization announced on Monday.

Links to Other Resources
In order to keep our Briefs "brief," we ask you to explore other key sites on your own, as you continue to pray for our nation, for Israel, and for His Kingdom on earth.

Posted by Capitol Hill Prayer Partners at 1:00 AM