For the first time in more than 100 years, much of the southeastern United States has reached the most severe category of drought, climatologists said, creating an emergency so serious that some cities are just months away from running out of water.

· Some Georgians speculate that one of the reasons for the Southeastern drought is Jimmy Carter's book he wrote calling for the dismantling of Israel. Also, the dalai lama has received an honorary professorship at Atlanta's Emory University. Whatever the Lord's reasons for withholding rain from this area and others in America, only He knows. So we ask Him in faith to please let the rain come once again on our land for His Glory!

· "He changes rivers into deserts, and springs of water into dry land. He turns the fruitful land into salty wastelands, because of the wickedness of those who live there." (Psalm 107: 33-34) 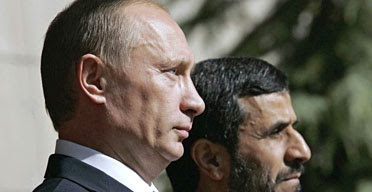 Vladimir Putin issued a veiled warning Tuesday against any attack on Iran as he made the first visit by a Kremlin leader to Tehran in six decades -- a mission reflecting Russian-Iranian efforts to curb U.S. influence. Putin also warned that Russia was considering withdrawing from a major cold war arms treaty banning intermediate nuclear missiles unless it was expanded to include other states. Secretary of State Condoleezza Rice worried by Putin's broad powers, said that the Putin led Russian government has amassed so much central authority that the power-grab may undermine Moscow's commitment to democracy.

· May Secretary Rice and her circle of advisors realize that their only hope is in You, Lord! May we all, including Mr. Putin, aspire to be written in Your Book of Remembrance. This is the only way we will not fail or be destroyed.

· "Then those who feared the Lord spoke to one another, and the Lord listened and heard them; so a book of remembrance was written before Him for those who fear the Lord and who meditate on His name." (Malachi 3:16 NKJV)

3. Violence Down 85 Percent Since May In Northwest Baghdad - World Tribune

The U.S. military has reported a halt in violence in a key area of the Iraqi capital. One reason for this is that the U.S. military reports a record number of tips from Sunnis in Baghdad. A growing number of Iraqi civilians have been relaying information on Al Qaida and Shi'ite insurgents and weapons caches.

· Dear Jesus, we fight to preserve Your precepts and the Law that Your Father gave to Moses. May we all remember how to love one another as You love us.

Jerusalem is emerging as a major stumbling block in new peace negotiations between Israel and the Palestinians. As Robert Berger reports from VOA's Jerusalem bureau, both Jews and Muslims are claiming the city's holy sites as their own.

· Woe to those who lay claim to Jerusalem, the city nearest to God's heart, who are not chosen of the Lord.

· "In the day of the wrath of the Lord; they will not satisfy their souls, nor fill their stomachs, because it became their stumbling block of iniquity. I will turn My face away from them, and they will defile My secret place. Destruction comes; they will seek peace, but there shall be none. Disaster will come upon disaster, and rumor will be upon rumor. I will do to them according to their way, and according to what they deserve I will judge them; then they shall know that I am the Lord!'" (Ezekiel 7: 19b, 22a, 25, 26a and, 27b NKJV)

A House vote to label the century-old deaths of Armenians as genocide was in jeopardy Tuesday after several Democrats withdrew their support and sounded alarms it could cripple U.S. relations with Turkey. The loss of support is a major setback to House Speaker Nancy Pelosi and other Democratic leaders on Capitol Hill, who have fiercely defended the resolution to Republicans and the Bush administration as a moral imperative in condemning the World War I era killings of up to 1.5 million Armenians by Ottoman Turks. President Bush called Pelosi on Tuesday to ask her not to call for a House vote on the resolution.

· Only God can correct the wrongs of a nation. Man can never erase the slaughter of these innocent people who eventually found a new home in America, specifically Central California. May our leadership commit these atrocities to God for His divine resolution that always corrects, resolves and satisfies.

· "My enemies without cause hunted me down like a bird. They silenced my life in the pit and threw stones at me. The waters flowed over my head; I said, 'I am cut off!' I called on Your name, O Lord, from the lowest pit. You have heard my voice: 'Do not hide Your ear from my sighing, from my cry for help.' You drew near on the day I called on You, and said, 'Do not fear!'" (Lamentations 3: 52-57 NKJV)

Tibet's Dalai Lama, clad in orange and crimson robes, was escorted today by President Bush to the U.S. Capitol Rotunda and surrounded by top congressional leaders for the presentation of the nation's top civilian honor. As Tibet's top Buddhist leader, he has been fighting for Tibetan autonomy from the Chinese government. His warm reception this week in Washington, that included a private Oval Office meeting, has riled Chinese officials.

The Dalai Lama, after meeting privately Tuesday with President Bush, brushed off China's furious reaction to U.S. celebrations this week in his honor. "That always happens," the exiled spiritual leader of Tibet's Buddhists said with a laugh, speaking to reporters gathered outside his downtown Washington hotel.

· Only those who disregard You Lord, would laugh at threats to our nation. May the truth behind this medal ceremony be revealed and all soul ties between our president and this false teacher be broken! We pray for safekeeping from wickedness for our president, and that he will be delivered from unrighteous relationships without stinging criticism. We pray for forgiveness for him and for those who organized this ceremony and all related events. May America be saved from all false religions for Your glory.

· "Do not incline my heart to any evil thing, to practice wicked works with men who work iniquity; and who do not let me eat of their delicacies. Let the righteous strike me; it shall be a kindness. And let him rebuke me; it shall be as excellent oil; let my head not refuse it." (Psalm 141: 4-5 NKJV)

After US Secretary of State Condoleezza Rice insisted on Monday that, "It's time for the establishment of a Palestinian state," Ha'aretz reported that the creation of that entity is now one of the Bush Administration's top priorities. However, enroute from Moscow to Tel Aviv on Sunday, Rice also cautioned, "I don't expect that there will be any particular outcome in the sense of breakthroughs," when referring to her current five-day visit to the Middle East. 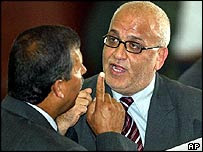 Palestinian chief negotiator Ahmed Qurei this week accused Israel of flippancy in the current pre-summit negotiations and told London-based Al-Quds al-Arabi that he was considering quitting. According to one of his associates, he will quit if Israel insists on focusing on a general statement and postponing discussions towards a comprehensive agreement on a Palestinian state, which he insisted "should be a detailed, clear-cut document on final-status issues."

The head of the Likud Party's foreign relations department gave a massive boost to the claims of Islam - Israel's most implacable enemy - Tuesday when he inferred that Jerusalem's Temple Mount was not sacred to the Jewish people. 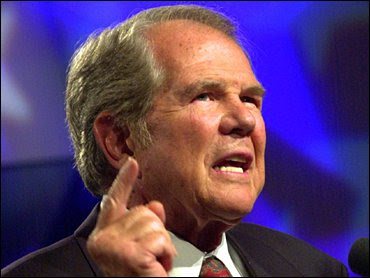 Woe betide the United States if the Bush administration pushes Israel into dividing Jerusalem with the Palestinian Arabs. So warned veteran Christian broadcaster Pat Robertson Monday following a flurry of reports that Israeli officials appear increasingly willing to compromise on...

5. Rice in Bethlehem: `Prince of Peace still with us`- Jerusalem newswire

US Secretary of State Condoleezza Rice apparently believes she has God's blessing to push Israel into giving up land for promises of peace from the "Palestinians." Wednesday, the fourth day of her visit to the Middle East.

Posted by Capitol Hill Prayer Partners at 12:18 AM