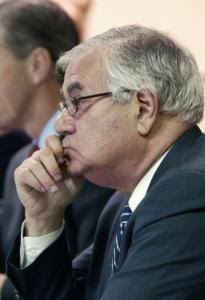 Democrats on Thursday sent to the full House, legislation that would prohibit workplace discrimination against homosexuals and bisexuals, despite bitter complaints from some because transgendered workers would not be protected under the bill. The vote on the Equal Employment Non-Discrimination Act (ENDA) is expected on the House floor this week.

· Heavenly Father, we pray that this assault against the laws that You have ordained will come to nothing. Put confusion in their camp so they will not be able to pass this bill. They will not acknowledge You, but YOU are in control. Amen!

President Bush will go to lawmakers on Capitol Hill to ask for another $46 billion to fund the wars in Iraq and Afghanistan.

· Some Gadites joined David at the stronghold in the wilderness, mighty men of valor, men trained for battle, who could handle shield and spear, whose faces were like the faces of lions, and were as swift as gazelles on the mountains. (1 Chronicles 12:8)

· We pray Lord, that You will make it evident who is the one that You have chosen to lead us. Let him be a man of God, righteous, and full of Your wisdom and truth.

· Then Samuel took the horn of oil and anointed him in the midst of his brothers; and the Spirit of the Lord came upon David from that day forward. So Samuel arose and went to Ramah. (1 Samuel 16:13)

Wildfires blown by fierce desert winds Monday reduced hundreds of Southern California homes to ashes, forced hundreds of thousands of people to flee and laid a hellish, spidery pattern of luminous orange over the drought-stricken region.

· Lord, You are in control of all. You are King of kings and Lord of lords. You speak and the winds obey You. We pray that the winds will die down and the rains will come to put out all the fires.

· Who has ascended into heaven, or descended? Who has gathered the wind in His fists? Who has bound the waters in a garment? Who has established all the ends of the earth? What is His name, and what is His Son's name, If you know? (Proverbs 30:4)

With water supplies rapidly shrinking during a drought of historic proportions, Gov. Sonny Perdue declared a state of emergency Saturday for the northern third of Georgia and asked President Bush to declare it a major disaster area.

· We pray that You will break this draught upon Georgia and other places that need rain.

· Now it happened in the meantime that the sky became black with clouds and wind, and there was a heavy rain. So Ahab rode away and went to Jezreel. (1 Kings 18:45)

Turkey poured additional troops and tanks into the Iraqi border area yesterday, even as it agreed to a U.S. appeal for "a few more days" to resolve a dispute over Kurdish rebel bases in Iraq.

· We pray the peace of the Lord upon Turkey's leaders and upon that area of conflict in northern Iraq. We pray that Iraqi officials will take control of those rebels and their bases to cause them to desist their attacks against Turkey.

· And the men of Gibeon sent to Joshua at the camp at Gilgal, saying, "Do not forsake your servants; come up to us quickly, save us and help us, for all the kings of the Amorites who dwell in the mountains have gathered together against us." (Joshua 10:6)

Israel is becoming increasingly worried that Egypt will allow more Palestinian terrorists to enter the Gaza Strip through the Sinai border.

Deadly raids into Turkey by Kurdish militants holed up in northern Iraq are the focus of urgent diplomacy, with Turkey threatening invasion of Iraq and the United States pleading for restraint while expressing solidarity with Turkish anger.

3. Abbas confident solution will be found by 2009 - Jerusalem Post

Palestinian Authority President Mahmoud Abbas, expressed confidence Monday a solution would be found to the Middle East crisis before the end of 2008. He also stressed the importance of reconciliation with Hamas.