"But the salvation of the righteous is of the Lord: he is their strength in the time of trouble. And the Lord shall help them, and deliver them: he shall deliver them from the wicked, and save them, because they trust in him." (Psalm 37:39-40) 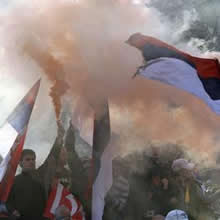 Riot police fired tear gas at Serb rioters as protesters wearing masks broke into the embassy, according to the Associated Press and Reuters. The embassy was reportedly closed and not staffed.

Rioters stormed the U.S. embassy in Belgrade, Serbia, on Thursday and started a fire in protest of Kosovo's declaration of independence earlier this week. Late today, a charred body was found inside the Embassy, but its identification is not yet known.

- We speak peace to the storm of protests in the Name of Jesus.

- "The He got up and rebuked the winds and the sea, and there was a great and wonderful calm." (Matthew 8:26 Amp)

A missile launched from a Navy ship struck a dying U.S. spy satellite passing 130 miles over the Pacific on Wednesday, the Pentagon said.

- Lord we thank You for the accuracy of our military in targeting this dangerous satellite! We pray that You will guard any left-over debris from causing damage or contamination.

- "But I have trusted in they mercy; my heart shall rejoice in thy salvation." (Psalm 13:5)

The liberal New York Times is wasting no time in smearing John McCain, the Republican Party nominee for President. Late Wednesday, the Times published to its website a story set to hit print editions Thursday, linking McCain to a female lobbyist. The paper suggested the Arizona Senator has been engaged in an illicit relationship.

- Father, we all stand for truth in this Presidential campaign. However, we ask that smear tactics and vicious practices stop and disappear from the entire process. We ask for clear issues to be presented without malicious intent whether Republican or Democrat.

- "Let not them that are mine enemies wrongfully rejoice over me: neither let them wink with the eye that hate me without a cause." (Psalm 35:19)

The Federal Reserve on Wednesday lowered its projection for economic growth this year, citing damage from the double blows of a housing slump and credit crunch. It said it also expects higher unemployment and inflation. The updated forecasts come amid worry by Federal Reserve Chairman Ben Bernanke and his colleagues that the economy could continue to weaken, even after their aggressive interest rate cuts in January, according to minutes of those private deliberations released Wednesday.

- We call on Your name, Lord. Help us at this time of economic difficulty. We pray for wisdom and for help from the throne room of God. Man cannot do this alone, only Your wisdom can change our direction. We repent for our actions against the land of Israel, for to divide the land will bring a curse. Have mercy, Lord.

A 6.3-magnitude earthquake hit northeast Nevada on Thursday, causing at least one building to crumble, according to the U.S. Geological Survey.

- Lord as strong quakes have been felt all over the world in the past month, we thank You that You are the God of mercy. We pray for the awakening of hearts toward You!

- "Remember not the sins of my youth, nor my transgressions: according to thy mercy, remember thou me for thy goodness' sake, O Lord." (Psalm 25:7)

A school bus and several other vehicles crashed in southwestern Minnesota Tuesday, killing four students and forcing the first-arriving motorists to rush some of the injured to nearby hospitals.

Gov. Tim Pawlenty issued a statement calling it "a sad night for Minnesota." "It is especially heartbreaking when young lives are lost," he said. "Our thoughts and prayers are with the families of those who were killed or injured in this tragic accident."

- We join with the Governor of Minnesota in calling for prayer for the families of those killed and injured in this accident. Remain in prayer that the cause of this tragedy be known quickly.

Anti-U.S. cleric Muqtada al-Sadr may let a six-month cease-fire expire as soon as Saturday, a move that could send his Shiite militia fighters back out on the streets and jeopardize recent security gains that have led to a sharp decline in violence.

- Lord we bind the plans of our enemies, and ask that Your heavenly host be dispatched to make an end of their threats.

"As the mountains are round about Jerusalem, so LORD is round about His people from henceforth even for ever." (Psalm 125:2)

Israeli mission at UN protesting 'genocidal' rhetoric from Tehran In his latest verbal attack against Israel, Iranian President Mahmoud Ahmadinejad on Wednesday called the Jewish state a "filthy bacteria" whose sole purpose was to oppress the Muslim nations of the region.

Reports are re-surfacing that the US is reviewing the feasibility of deploying a NATO force in Judea/Samaria as a way to ease IDF security concerns and facilitate an Israeli withdrawal from the West Bank within the coming years. Netanyahu: Olmert planning to divide Jerusalem - Ynet News "Israel must not, under any circumstances, withdraw from Jerusalem and allow another terrorism base to be established in the heart of the country," Opposition Leader Benjamin Netanyahu stated Wednesday.

4. Iran urges UN to condemn Israel for threatening use of force - Jerusalem Post

Iran urged the UN Security Council on Wednesday to condemn Israel and demand that it immediately stop threatening to use military force against the country's nuclear program.

Iran, holder of the world's second- largest oil and gas reserves, opened an exchange for crude and petrochemicals as the government encourages private investment in the energy sector. The Iranian rial will be used for all transactions in the first phase and ``can be converted in real time into any currency,'' Nozari said. The exchange may also use the Russian ruble "to free the world of dollar slavery," Iran's ambassador to Moscow, Gholamreza Ansari, said Feb. 15.

- Prayer Point: This exchange, also called a "bourse," enables buyers to use Euros rather than dollars to purchase oil, creating very serious consequences for the value of the dollar on the global market. Pray for wisdom for President Bush and the administration, as they weigh how to respond to this move; and pray for wisdom for traders on the world oil market, too. God CAN make a way . . .

- "The fear of the LORD is the beginning of wisdom, and the knowledge of the Holy One is understanding."(Proverbs 9:10)


Prayers for the Persecuted Church

[Note: The following news items are featured on the website for International Christian Concern. Links to original articles are posted there.]

Arab satellite television channels face tighter restrictions on the content they broadcast. The charter, sponsored by Egypt and Saudi Arabia, calls on stations "not to offend the leaders or national and religious symbols" of Arab countries.

CBNNews.com - The nation of Jordan has admitted deporting Christian missionaries for what it calls illegal "preaching activities." The country's foreign minister says the missionaries were in Jordan to do charity work.

Under Jordanian law, only government-approved religions are allowed to be practiced in the Muslim nation. Many Christians now believe the kingdom's long-standing view of religious tolerance may be declining.

3. Hundreds Participate in Human Rights Torch in Israel Despite Rain - The Epoch Times

Although weathermen predicted storms and occasional rain, hundreds of people came out to support the Human Rights Torch Relay in Tel Aviv Monday evening, Feb. 18, and called for an immediate end to all crimes against humanity taking place in China before the 2008 Beijing Olympic Games.

Praise may be hard to come by at home, but President Bush is certainly enjoying a hero's welcome during his tour through Africa. With approval ratings well into the 80th percentile in nations like Kenya and Ghana, the President's popularity is a true testament to the contribution that America's generosity has made to the health and safety of the African people. Through the President's Emergency Plan for AIDS Relief (PEPFAR), the U.S. has given life-saving antiretroviral treatment to almost a million and a half men, women, and children in 15 countries. With messages of abstinence and fidelity at the fore, America has supported community outreach to 61.5 million people. With an unprecedented $15 billion in relief, the U.S. has spent more than any other country to fight HIV/AIDS in Africa--with much to show for it.

Unfortunately, the very values that have made the program effective are under attack from leaders at home. When the PEPFAR comes up for reauthorization on February 28, Rep. Howard Berman (D-Calif.)--Chairman of the House Foreign Affairs Committee--will make every effort to strip the ABc model from the bill in favor of money for abortion providers and promoters.

As the President is busy surveying the success that his approach has had in preserving future generations, Berman and the Democratic leadership are plotting to turn the program into something that would help eliminate Africa's next generation. Under Berman's proposal, PEPFAR could permit abortion services at taxpayer expense, as well as the removal of the Prostitution Pledge, which would give a U.S. stamp of approval on global sex trafficking and prostitution! At a time when President Bush is enjoying almost unanimous praise from African leaders for PEPFAR, he reminded Congress to "listen to the leaders on the continent of Africa, analyze what works, stop the squabbling, and get the program reauthorized." If our tax dollars are going to go overseas they should go to program like the current PEPFAR that promote pro-family policies. Do your part to keep it that way; ask your member of Congress to resist the urge to turn PEPFAR into another international family planning program. (Family Research Council)

Going out on a Limb with Adult Stem Cells 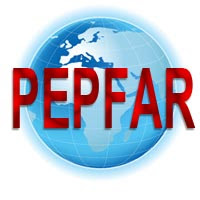 New success with adult stem cells may translate into 100,000 fewer U.S. amputations a year, say researchers at Chicago's Northwestern Memorial Hospital. After 10 years of clinical trials in mice and rats, scientists have moved on to human patients, whose own stem cells helped their leg muscles grow new blood vessels to reestablish circulation. This study could renew the hope of people suffering from the painful condition known as critical limb ischemia (CLI) as soon as 2012. Every day, it seems, adult stem cells are blowing away the competition with their ability to ethically address so many medical challenges. Their versatility and ability to treat patients now just go to show that there is no reason for America's leaders to abandon the President's pro-life posture on embryonic stem cell research. (Family Research Council)

Prayer for the Primaries

REMAINING CAUCUS FOR THE MONTH OF FEBRUARY:

PRIMARIES, CAUCUSES FOR THE MONTH OF MARCH:

Posted by Capitol Hill Prayer Partners at 2:07 AM