U.S. Senator Sam Brownback today applauded passage of an amendment to the Indian Health Care Act (S.1200) offering an official apology from the United States federal government to Native Americans. Senator Brownback has been calling for an apology since 2004. "With this apology, the federal government can repair and improve our relationship with Native Americans," said Brownback. "While we cannot erase the past, this amendment hopefully helps heal the wounds that have divided America for too long." (See full article, below.)

· OFFER GREAT PRAISE TO THE LORD FOR THIS BREAKTHROUGH IN THIS KEY PIECE OF LEGISLATION, WHICH MAY BRING HEALING TO OUR LAND. Continue in prayer as this bill makes its way through the House towards passage there. Praise God!

· "That He may send Jesus Christ...whom heaven must receive [retain] until the times of restoration of all things." (Acts 3:20-21)

Family and friends mourn 5 students, including aspriring teachers and a former soldier, killed at Northern Illinois University. The gunman, 27-year-old Steven Kazmierczak, was described by University Police Chief Donald Grady as a good student during his time at NIU, and by all accounts a "fairly normal" person.

· Ask our Lord to place a shield of protection over any school or college in your own community. Ask that a spirit of violence be bound from entering into anyone who has or who has had a history of mental problems. Speak peace and comfort to the hearts of the families of the victims.

House Democrats yesterday refused to revisit an update of the nation's domestic wiretapping rules before they expire tomorrow at midnight, causing Republicans to storm out of the chamber in protest.

· Lord, we ask You to intervene and bring down the dividing walls on this issue. We ask protections for phone companies against law suits. Open up our system for the laws that would give the surveillance tools we need to expose terrorist plots. We place our trust in You.

· Cast thy burden upon the Lord and he shall sustain thee: he shall never suffer the righteous to be moved. The Lord is good, a stronghold in the day of trouble; and he knoweth them that trust in him. (Ps. 55:22, Nahum1:7)

· Father, we continure to pray Your will to be done in choosing the right President. Our trust is in You for wisdom and guidance through this election process.

5. US: Broken Satellite Will Be Shot Down - AP

The Pentagon is planning to shoot down a broken spy satellite expected to hit the Earth in early March, The Associated Press has learned.

· Lord, we ask for Your guidance in choosing the right option to destroy this satellite. We pray for complete protection from harm and from any parts falling into the wrong hands. Bring this mission to full success in all areas of concern.

· A man's heart deviseth his ways: but the Lord directeth his steps. For his God doth instruct him to discretion, and doth teach him. (Prov.16:9, Is.28:26)

A senior Justice Department official says laws and other limits enacted since three terrorism suspects were waterboarded have eliminated the technique from what is now legally allowed.

· Lord, grant wisdom to those responsible to extract information from terrorists. We ask You specifically to give new strategies that will work effectively.

· For the Lord giveth wisdom: out of his mouth cometh knowledge and understanding. He layeth up sound wisdom for the righteous: he is a buckler to them that walk uprightly. (Prov.2:5-7)

Russia has threatened to target the Ukraine with nuclear warheads if the former Soviet republic joins Nato and accepts the deployment of United States anti-missile defences on its territory.

· Lord, give strength to Viktor Yushchenko to maintain the right of his country to decide their own foreign policy. We pray for the Ukrainians to support their leader as he works to establish an alliance with their neighboring countries. We pray against the spirit of fear over the people of Ukraine.

· And thou shalt be secure, because there is hope; yea, thou shalt dig about thee, and thou shalt take thy rest in safety. Also thou shalt lie down, and none shall make thee afraid;. . . But the eyes of the wicked shall fail, and they shall not escape, and their hope shall be as the giving up of the ghost. (Job 11:18-19)

Hezbollah's leader threatened Thursday to strike Israel anywhere in the world in retaliation for what he said was its role in assassinating Imad Mughniyah, a Hezbollah commander blamed by the United States and Israel for killing hundreds in bombings, kidnappings and hijackings over a quarter-century.

Prime Minister Ehud Olmert faced two new threats to his 67-MK coalition on Thursday just as Shas retracted its threat to leave the government over secret negotiations about Jerusalem's future that were revealed in The Jerusalem Post.

Syrians are preparing to sue the United States for supplying weapons to Israel that later killed Syrians during the Second Lebanon War, said Syria's foreign minister, a day after Washington announced new sanctions against Damascus. 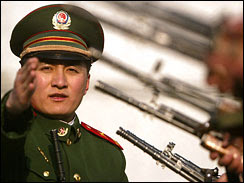 One of two men arrested Saturday in connection with the killing of an American diplomat, John Granville, in Sudan last month is a Sudanese Army officer, a senior Sudanese law enforcement official said Monday. According to the official, the army officer was the ringleader of a small cell of terrorists, and was not acting on behalf of the Sudanese government.

Seventeen people have been charged with the murder of a Catholic priest of the Diocese of Nakuru during the post-election violence that gripped Kenya in January. Fr. Kamau, 41, was killed at an illegal roadblock set up by armed youth on the Nakuru - Eldama Ravine Road. He was vice rector at St Mathias Mulumba Senior Seminary in Tindinyo.

WASHINGTON - U.S. Senator Sam Brownback today applauded passage of an amendment to the Indian Health Care Act (S. 1200) offering an official apology from the United States federal government to Native Americans. Senator Brownback has been calling for an apology since 2004.

"With this apology, the federal government can repair and improve our relationship with Native Americans," said Brownback. "While we cannot erase the past, this amendment hopefully helps heal the wounds that have divided America for too long."

The Indian Health Care Act was being debated on the Senate floor this week. Brownback's resolution, which had 13 co-sponsors, and passed tonight by voice vote as an amendment, recognizes the impact of destructive federal policies in the past toward Native Americans and is intended to facilitate reconciliation and healing.

Brownback continued, "Our nation's relationship with the Native peoples of this land is an issue that is very important to the health of the United States. For too much of our history, Federal-Tribal relations have been marked by broken treaties, mistreatment, and dishonorable dealings. We can acknowledge our past failures, express sincere regrets, and establish a brighter future for all Americans.

"This amendment does not diminish the valiance of our American soldiers who fought bravely for their families in wars between the United States and a number of the Indian Tribes. Nor does this amendment cast the blame for the various battles on one side or another. What this apology does do is recognize and honor the importance of Native Americans to this land and to our nation - in the past and today - and offers this apology to Native peoples for the poor and painful choices our government sometimes made to disregard its solemn word. Hopefully, this apology will help restore the relationship between the United States and Native Americans."

· Offer praise to the Lord for the wisdom He has granted to the sponsor of this Apology in the Senate, Senator Sam Brownback, as he has skillfully and patiently guided this amendment through the Senate chamber towards passage. Initially offered as S.J.Res. 4, the Apology has yet to pass through the House of Representatives, where it is sponosred by Rep. Dan Boren as H.J.Res. 68.

See information on the of Apology to the Native Peoples at http://www.nativeres.org/

President Bush and first lady Laura Bush left today on a trip to Africa, where they will visit five countries - Benin Republic, Tanzania, Rwanda, Ghana and Liberia - in a one- week tour. They will remain in Africa through Feb. 21st. The trip will be an opportunity for President Bush to "review firsthand the significant progress" made in the fight against HIV/Aids and malaria. The United States has spent billions on programs fighting HIV/Aids, malaria and other diseases.


The President has called on Congress to double funding for "President's Emergency Plan for Aids Relief" (PEPFAR) to.$30 billion. PEPFAR focuses primarily on Africa. According to government statistics, the program has helped more than one million people get antiretroviral treatment. "Difficult challenges remain, including ending genocide in Darfur, restoring peace and stability to Kenya, and bringing freedom to the Zimbabwean people," said the President. (allAfrica.com; AFP 1/25/08)


· Offer thanksgiving for a shift toward the recognition and incorporation of faith, religion, and reconciliation in U.S. statecraft. Intercede for biblically informed U.S. foreign policy. Ask the Lord to protect President and Mrs. Bush, their staff and Secret Service team members. Offer thanksgiving that the President's AIDS/HIV policies and funding have been successful in reaching and helping over a million Africans. (Intercessors for America)


· "I will instruct thee and teach thee in the way which thou shalt go: I will guide thee with mine eye." (Psalm 32:8)


Prayer for the Primaries

Posted by Capitol Hill Prayer Partners at 1:23 AM