And you shall be secure and feel confident because there is hope; yes, you shall search about you, and you shall take your rest in safety. (Job 11:18 Amp)

U.S. stocks plunged on Thursday, falling a third straight day, as a drop in regional factory activity and a hefty loss at Merrill Lynch further clouded an increasingly dire view of the economy. Amidst recession fears, Federal Reserve Chairman Ben S. Bernanke embraced congressional plans to quickly pass an economic stimulus package of up to $150 billion including middle-class tax rebates, investment tax breaks, and unemployment and food assistance for the poor. President Bush is expected to make comments on stimulating the economy today.

· Lord, we pray Your blessings over our economy. All that we have belongs to You. Help us to be good stewards over the abundant blessings our nation enjoys, and we ask for strength to the U.S. dollar world wide. As we put our trust in You, please give wisdom to those who develop the plans to overcome the drop in economy. 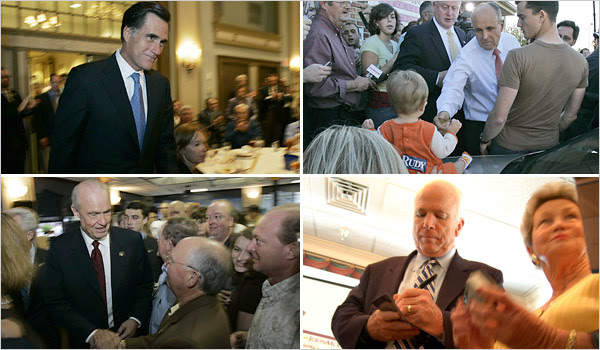 Their presidential aspirations at stake, Republican contenders Mike Huckabee and Fred Thompson are locked in battle for a segment of voters that could determine the outcome of tomorrow's primary: conservative Christians. Nevada also holds its caucuses that day.

· Lord, we pray Your will in tomorrow's South Carolina primary as well as the Nevada caucuses. Direct and guide Your perfect will for Mike Huckabee and Fred Thompson and all of the presidential candidates. We pray for a president with a strong voice toward Your ways, purposes and desires.

President Nicolas Sarkozy's increasingly frequent and positive references to God and faith have drawn fire from critics who accuse him of violating France's separation of church and state. Jean-Louis Debre, a leading Gaullist who is now head of the Constitutional Council, indirectly chided Sarkozy by saying the 1905 law separating church and state was a good one and that it was "opportune to make sure its balance is not upset."

· Lord, make President Nicolas Sarkozy's faith a shield of protection. Build his faith with Your Word so that it will grow big enough to believe that all things are possible. Put faith into action to move the mountains in his life. Let the sparks begin a fire of repentance and love for the one true God.

· "That He would grant you, according to the riches of His glory, to be strengthened with might through His Spirit in the inner man, that Christ may dwell in your hearts through faith; that you, being rooted and grounded in love, may be able to comprehend with all the saints what is the width and length and depth and height - to know the love of Christ which surpasses knowledge; that you may be filled with the fullness of God." (Ephesians 3:16-18)

· Lord, we do not see Your hand for good in this work. We pray for experiments that cross the line of Your blessing to cease. We pray for only that which is to produce good and is profitable to go forth for research and experiments.

· "The hand of our God is upon all those for good who seek Him, but His power and His wrath are against all those who forsake Him." (Ezra 8:22b)

Christian indigenous villagers have sued Malaysia's sole Islamic opposition-ruled state government for demolishing their church, which they claimed was sitting on ancestral land. The village headman and three others of the Temiar community, or Orang Asli, which means "Original People" in the Malay language; have challenged the state government - controlled by the opposition Pan Islamic Party - in court, seeking a declaration that the land belonged to them and the demolishment was unlawful.

Pastor Moses Soo, whose Christian group helped the Temiar villagers build the church, accused the Kelantan government of discriminating against Christianity. The Orang Asli is made up of some 18 ethnic tribes who make up less than 1% of the 27 million people in this mostly ethnic Malay Muslim nation.

· Lord, we pray for our brothers and sisters in Malaysia. We call on You to work deliverance in their day of trouble. We pray strength in the Lord, so they can stand against the wiles of the devil. We ask for this court case to turn in their favor and for the government to make restitution for all damages. May this be the beginning of many Christian related cases World-Wide that glorify You and bring an awareness of You, that will bring many of the lost to know You as their Savior.

· "And the Lord shall help them and deliver them; He shall deliver them from the wicked and save them, because they trust in Him." (Psalm 37:40)

"Hear my cry, O God; attend unto my prayer. From the end of the earth will I cry unto You. When my heart is overwhelmed: lead me to the Rock that is higher than I." (Psalm 32:8)

Palestinian Authority President Mahmoud Abbas is considering resigning from his post if Israel continues its military operations in the West Bank and Gaza Strip, a top PA official said Thursday.

Israel's security establishment held a successful rocket systems test at the Palmachim Air Force Base Thursday, adding a propulsion system to a test-missile in order to review its operation.

Total donations from a Paris aid conference for the Palestinians last month have increased to at least $7.6 billion after countries fine-tuned their contributions, officials said Thursday.

"Thomas Jefferson counted the freedom of worship as one of America's greatest blessings. He said it was 'a liberty deemed in other countries incompatible with good government, and yet proved by our experience to be its best support.' On Religious Freedom Day, we celebrate the 1786 passage of the Virginia Statute for Religious Freedom.

"The freedom to worship according to one's conscience is one of our Nation's most cherished values. It is the first protection offered in the Bill of Rights: that 'Congress shall make no law respecting an establishment of religion, or prohibiting the free exercise thereof.' In America, people of different faiths can live together united in peace, tolerance, and humility. We are committed to the proposition that as equal citizens of the United States of America, all are free to worship as they choose.

"In an era during which an unprecedented number of nations have embraced individual freedom, we have also witnessed the stubborn endurance of religious repression. Religious freedom belongs not to any one nation, but to the world, and my Administration continues to support freedom of worship at home and abroad. On Religious Freedom Day and throughout the year, we recognize the importance of religious freedom and the vital role it plays in spreading liberty and ensuring human dignity.

"NOW, THEREFORE, I, GEORGE W. BUSH, President of the United States of America, by virtue of the authority vested in me by the Constitution and laws of the United States, do hereby proclaim January 16, 2008, as Religious Freedom Day. I call on all Americans to reflect on the great blessing of religious liberty, endeavor to preserve this freedom for future generations, and commemorate this day with appropriate events and activities.

"IN WITNESS WHEREOF, I have hereunto set my hand this fourteenth day of January, in the year of our Lord two thousand eight, and of the Independence of the United States of America the two hundred and thirty-second."

· Offer a great chorus of praise on behalf of this action by President Bush, and lift up prayer that January 16th will continue to be designated Religious Freedom Day in coming years. Praise God! · "Let every thing that hath breath praise the Lord. Praise ye the Lord." (Psalm 150:6)